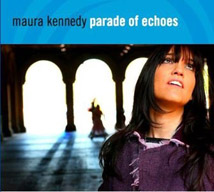 When you’re used to performing in a duo and you decide to step out with your first solo effort, generally you need to do a little extra to make up for the absence of your partner. In this case though, it’s hard to say that Pete Kennedy, Maura’s husband and partner in the long-running folk/pop duo the Kennedys, is missing since he appears one way or the other on eight of the 13 tracks on Parade of Echoes.

So why call this one a solo record? For starters, Maura wrote most of the songs without her hubby, taking a year to let the album develop at a pace of one song a month and each song gives her a chance to show off her main asset – her singing. She also plays a lot of instruments here that she wouldn’t normally with the Kennedys, including bass, drums, keyboards and assorted sound effects.

The bottom line is that fans of the Kennedys will not be alienated here even though Maura is nudging this set away from folk and more into pop, especially with keyboards whipping up faux orchestration on “New Way to Live,” the driving country-rock beat of “Chains” and the tried-and-true Buddy Holly rhythm of “Make it Last.”

Parade of Echoes is currently available.