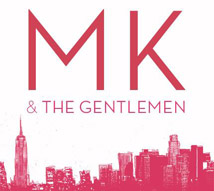 Throughout the disc, Mk and the Gentlemen eclectically cruise through various musical styles that showcase a band that is not necessarily searching for its own identity, but merely trying to project its broad sense of musical inspiration. From the funky sound of “Twenty” to the alt-country textures of “Highland Park” the band unapologetically swings for the fences, no matter which genre it’s chasing.

Although MK falls a little flat on the ultra twangy sounding “Highland Park,” the band is at their best when hammering through the bouncy funk of songs like “Baby Come Back.”

“Baby Come Back” features lead singer Mick Kelleher’s smooth flowing rhymes that are reminiscent of Sublime’s Bradley Nowell. The song carries a strong hook and a groovy, almost Hendrix-styled guitar riff, which gives a sense of jam band bliss to energetically set the tone for the rest of the EP.

The album’s standout track, “Hollywood Hello,” is a catchy O.A.R. inspired track carried by a thunderous piano and acoustic guitar.

Mixed Tape EP surely displays the band’s knack for creating undeniable party songs. But these are party songs with depth.


The Mixed Tape EP is currently available.
Article posted on 2/9/2010
This article has been viewed 1610 times.