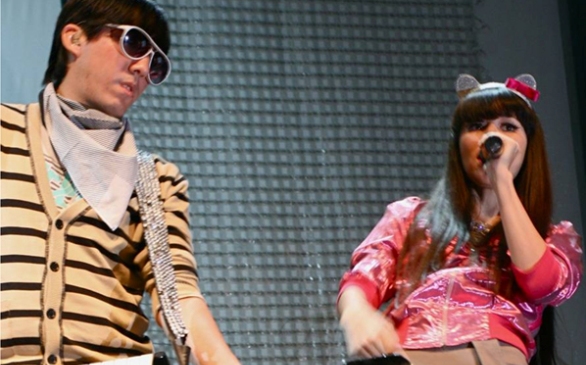 If you’re going to put out an album called Love, what better day to have it drop than Valentine’s Day? Feb. 14 is the release date for just such an album, the third studio release from Angels & Airwaves.

And since the band can’t buy everyone a box of chocolates, they’ll instead be showing their affection by offering fans a free download of Love. AvA frontman Tom DeLonge, fresh off a lengthy tour with his “other” band blink-182, says that “free Love” has been in the works for a couple of years now.

Angels & Airwaves formed after the breakup of the now reunited blink-182 and have sold over two million records worldwide. Find info on the free Love download at angelsandairwaves.com.

A New Addiction for Alkaline Trio

Seminal punk rock cult heroes Alkaline Trio are ready to drop their new album, This Addiction, and Epitaph/Heart & Skull are releasing the music in several different configurations. The standard CD and digital download versions feature 11 new songs while the deluxe collector’s edition includes six bonus songs and a DVD of the band in concert in Las Vegas in 2008.

This Addiction will also be available in a gatefold vinyl package and in various bundles; all drop on Feb. 23. Alkaline Trio will preview This Addiction with shows on Feb. 16 at the Glass House in Pomona and on Feb. 17 at the House of Blues Sunset Strip.

Described as a blend of Coachella, Sundance, Burning Man and Jewish summer camp, the sixth annual Jewlicious Music Arts and Culture Festival will be held Feb. 19 through 21 at the Alpert Jewish Community Center in Long Beach.

The festival will feature leading Jewish musicians, artists, writers, teachers and change-makers from around the world, including musical acts Electro Morocco, Moshav and the Kosha Dillz Band on Saturday, Feb. 20. There’ll also be an after-party that evening with SoulSpeak and Diwon keeping the beats going until 4 a.m.

Acts scheduled for Sunday include the Basya Schecter Duo, Rav Shmuel and Yael Meyer. Kira Soltanovich of “Girls Behaving Badly” and numerous other comedic acts will also appear at the festival. More info at jewlicious.com.

The three-day MUSINK Tattoo Convention and Music Festival will be held at the Orange County Fair & Exposition Center in Costa Mesa beginning on Feb. 19. The lineup for the weekend includes NOFX, the Cult, Face to Face, the Damned, Buzzcocks, the Jim Rose Circus, the Invisible Humans and a band called the Headcat that features Lemmy Kilmister from Motorhead and Slim Jim Phantom of Stray Cats fame.

Dozens of world-renowned tattoo artists including Jack Rudy & the G.T.C.’s crew, Mike Brown, Corey Miller and Flip Leu & the Leu Family’s Family Iron will be in attendance; there’ll also be a motorcycle show and professional BMX and skateboard contests. The full list of events and performances can be found at musink.org.

Icelandic producer and composer Valgeir Sigurdsson will release Dreamland, a soundtrack to the documentary film of the same name Feb. 22. The film takes a look at Iceland’s aluminum smelting boom, an industry that was initially perceived as a godsend for Iceland before everyone realized the consequences to the country’s environment.

Sigurdsson, who was for many years one of Björk’s closest studio collaborators, has enlisted composer Nico Muhly, avant-garde pianist Daniel Bjarnason, industrial soundsmith Ben Frost and American folk singer Sam Amidon to help musically tell the story of a beautiful landscape on the brink of devastation. The film has not yet opened in the U.S., but screening dates will be announced soon at dreamland.is.

Doom metal act Black Cobra have just released their Chronomega album on colored vinyl with a red and yellow splatter design and a red and black swirl design. The band will sign your purchase when they appear in-store at Vacation Records (4679 Hollywood Blvd., Los Angeles; VacationVinyl.com) at 5 p.m. Feb. 14.