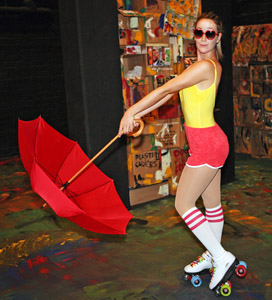 “bobrauschenbergamerica” is incredibly entertaining. Directed by Bart DeLorenzo, written by Charles L. Mee and choreographed by Ken Roht, the play brims with colorful characters, 43 different scenes (a range of musical numbers) and is backed by explosive energy.

It’s a tribute to the late artist Bob Rauschenberg and his work; actually, it’s not about Rauschenberg but about what he saw. Rauschenberg’s work is a reflection of America, which consequently involves love stories, picnics, business schemes, shootings and, of course, a person in a chicken costume strolling across center stage. Through collages, Rauschenberg realized a technique that came to be known as “Combines,” which are collages created from nontraditional materials (e.g. pictures, familiar prints, sculptures, tennis balls, stuffed goats) that attempt to blur the line between art and life.

Reviewing “bobrauchenbergamerica” is like describing another description. The collage of scenes that makes the play, as well as the themes and characters, work more or less as a mirror than a story. There’s nothing logical about the production, yet it makes sense; like 10 people giving their interpretation of one piece of art – at the same time! Each scene takes you hostage and relentlessly impresses sheer exhilaration for living in a country where people make up their lives as they go.

The play works quite well. I barely notice that an hour and 45 minutes, with no intermission, passes. This depiction of America, as seen through Rauschenberg’s eyes and under DeLorenzo’s direction, is fearless and optimistic, but best of all unedited.

If you get tired of a scene, rest assured it will soon end. However, much like life, you don’t always like what you see or what you get. Some scenes may be outlandish, but in a way that forces you to acknowledge the myriad forms reality can take.

“bobrauchenbergamerica,” while sensitive and philosophical, gives your eyes a workout, then sends you back into the world.

[Inside] the Ford is located at 2580 Cahuenga Blvd. E., Hollywood. For more information, visit fordtheaters.org.