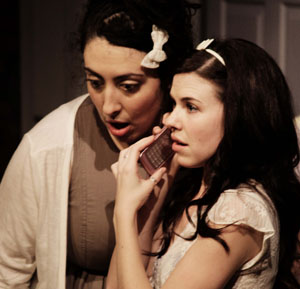 Nina Millin (as Elizabeth) and Amber Hamilton (as Beth)

I have a thing for titles of plays. When I found out about “Ditch,” by playwright Taylor Coffman, I wanted to know the story behind the name. Amber Hamilton convincingly plays Beth, a young woman minutes away from getting hitched, who gets cold feet, freaks out, jumps in her car to run away and ends up in a ditch; hence the title.

Her first phone call is not the expected emergency 911 call. Instead she dials William, wonderfully played by Alex Klein, her ex-boyfriend.

From that point on ensues the battlefield that we all know as love. Both characters have to deal with the darker side of their egos (that little nagging negative voice within that insists on always being right). Beth’s dark ego is named Elizabeth, played aggressively by Nina Millin, and William’s is Bill, played by a hilarious Todd Veneman.

It was refreshing to watch the exuberant chemistry between the actors, a testament to director Jon Cohn’s vision. Cohn also happens to be the founding Artistic Director of the Mutineer Theatre Company.

There was great use of space and props from the airplanes hanging on the ceiling to the gigantic boxing gloves used in the boxing ring. I also have to point out the couch cut in half, each side positioned on both ends of the stage, a nice touch by set designer Davis Campbell. The sound elements of the show, designed by James Richter, contributed to some of the most outrageous comedic moments of the show.

Still, it is the message of the play that stays with you when the show closes and the laughs subside. The message of quieting that negative voice within that too often gets in the way of our happiness and trusting that love does triumph after all.