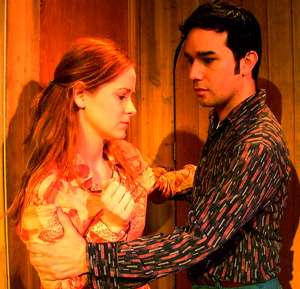 Upon entering the set of “Seascape with Sharks and Dancer,” a play written by Don Nigro and directed by Benjamin Haber Kamine, audiences find themselves before a dilapidated beach house living room. The stage, though amply and adequately set, is bare in only the way a decrepit beach house can be. It’s the mid-’70s and naturally the furnishings are made of wood (or wood-paneled), a typewriter sits on the desk by the window and books are scarcely scattered throughout the room.

This romantic comedy takes place in an aspiring writer’s house. The story is simple: Ben (played by Matthew Hannon) works at a library and fishes Tracy, a troubled girl (played by Christine Weatherup), out of the surf. Tracy claims she was dancing out in the water with the sharks, but Ben thinks she was in trouble – and so their relationship ensues, pretty much in the image of their initial encounter, in squabbles.

The naturally self-destructive Tracy can be bossy; the emotionally stunted Ben is insecure. Ben’s insecurity is thematized so much that somehow by the second act (which is much better than the first), true love is thrust upon the story.

The play moves so fast that much of the story is unbelievable. Thankfully, some humorous cynicism veils a sickening amount of romantic sentimentality found in Tracy’s “I’m cold” complaints and Ben’s kind face and smiles as he takes Tracy’s crap.

The importance in setting “Seascape with Sharks and Dancer” in the ’70s was lost on me. The play itself was hardly reminiscent of the era; aside from Ben’s bell-bottomed jeans and the poncho sweater Tracy ran around in. Frankly, the setting fell short since the story we were shown didn’t exactly capture the stories we tell ourselves when it comes to this period in America.