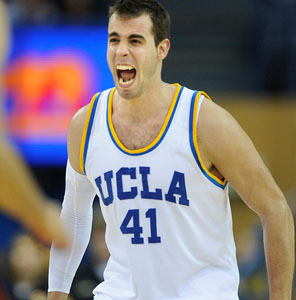 The Pac-10 is on the verge of being an endangered species this year. Here we are in week 14, about 25 games into the season with March Madness starting to come into our sights, and the Pac-10 team is 0-for-everything in the AP Top 25 Poll.

Something is definitely wrong when the Ivy League has more teams receiving Top 25 votes than the Pac-10. (Cornell ranked 27th in the latest poll, just 35 votes shy of 25th-ranked Pittsburgh and one fewer vote than Texas A&M.)

Yes, THAT Ivy League, home to Harvard, Yale and a combined zero Division I basketball championships. (Half of the Pac-10 men’s teams have won at least one national championship.)

Just how weak is the Pac-10, you ask? Well, take Stanford, who is 4-7 in conference play and 10-13 overall – good for last place in league standings. The Cardinal are just three games out of first place in the conference.

By comparison, Weber State – another team not receiving votes for the Top 25 Poll – barely sits atop the Big Sky Conference with a 9-2 record, and the Wildcats are six-and-a-half games ahead of the league’s cellar dweller (Eastern Washington).

Top-ranked Kansas is separated from Big 12’s worst team by seven games, while No. 2 Syracuse is nine ahead of the Big East basement program in DePaul.

Hey, it could be worse. Just ask Alcorn State (0-23) or Bryant University (0-24). Or could it be worse? One ESPN.com writer put it all in perspective last week.

“Chances are there could be only one Pac-10 team included in the [NCAA tourney] field when the dust settles,” Mark Schlabach says in his ESPN.com feature. “That’s how lousy the league has been this season.”

Perhaps “lousy” is not strong enough of an adjective to describe the Pac-10’s woes this year, what with four other teams currently tied with UCLA for second-place in the conference standings. Heck, UCLA (11-12, 6-5) has a chance to claim the Pac-10 title despite currently sporting a losing record and embarrassing performances against Cal State Fullerton and Long Beach State.

On the bright side, perhaps UCLA can use the conference’s weakness to its advantage, what with a probable Bruin victory over USC on Valentine’s Day to keep hopes alive in Westwood for yet another conference title. The question is: Do the Bruins actually want to win the Pac-10 this year, as pathetic as things have looked up and down the conference?

Indeed, the Bruins are a watershed of just how bleak the outlook is for the entire conference this year. The fact that UCLA heads into this weekend’s rivalry game trailing the Pac-10 leader by just one game speaks volumes. To think the Bruins could have actually claimed the conference top spot last weekend had they beaten California is even more mind-numbing.

Of course, matters are even worse for USC. While the Trojans are 14-9 overall and currently tied with UCLA and three other teams for second place in the Pac-10, Southern California is playing all for naught, really.

Sure, the Trojans are 2-2 against ranked opponents this year, but the school excused itself from making an appearance in the Big Dance, what with USC paying the price for recruiting violations surrounding O.J. Mayo in 2007. Accordingly, we will never know if this year’s edition of the Trojans could have built upon consecutive victories over No. 8 Tennessee and No. 20 UNLV.

Then again, had USC, UCLA or any other Pac-10 school played in any other conference this season, odds are highly against any of the teams qualifying for the Field of 65 next month. That is just how “lousy” the Pac-10 is in 2010.

Unfortunately, the NCAA will, indeed, probably include at least the Pac-10 champion in the Big Dance, just by way of sympathy vote. Unless, of course, that champion is USC, in which case the situation looks even worse!

So what, exactly, went wrong this year? Is it parity? Maybe it is just a fluke season. Perhaps the 10 teams did a poor job of recruiting.

Hey, if it is recruiting, maybe the NCAA needs to repeal its existing rule over basketball to follow the lead of USC football and allow coaches to start attaining verbal commitments from 13-year-old “phenoms.” Then again, who wants to burst the bubbles these young kids live in nowadays?