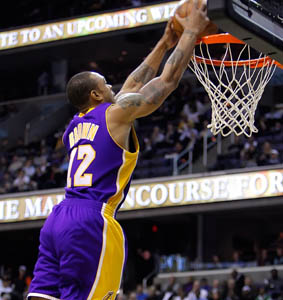 Kobe Bryant, the youngest All-Star in history in 1998 and three-time All-Star MVP, makes his 12th appearance in this year’s NBA All-Star Game. Bryant is the second leading vote-getter behind LeBron James of the Cavaliers.

Joining Bryant as a reserve center for the west is Pau Gasol in his third appearance as an All-Star. Gasol also takes part in the Haier Shooting Stars competition with Marie Ferdinand-Harris of the Los Angeles Sparks and NBA TV analyst Brent Barry.

Laker guard Shannon Brown is surely getting tips from Bryant, who was the 1997 Slam Dunk Champion. The high-flying Brown faces off against Nate Robinson, Gerald Wallace and either Eric Gordon or DeMar DeRozan (depending on the results of the Dunk-In Feb. 12 during halftime of the Rookie Challenge) in the Sprite Slam Dunk contest.