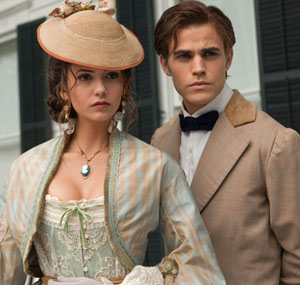 It has been said that watching good television transports you to the setting, invites you to the situation and makes you fall into the characters. While credit is often given to the actors, producers, directors and so on, how often do we think of those who put together the style-specific costumes?

Jennifer Bryan has been performing this magic in the costume design industry for over 20 years, continuing with the same drive and excitement she had when she first started on Broadway. She has since switched to working on films and television shows, and most recently, she has scored the wonderfully challenging role as costume designer for the CW hit series “The Vampire Diaries.”

“My inspiration behind the designs is really driven by the individual characters and their environment, a high school in Virginia,” she explains. “Cinematically, however, I keep a monochromatic palette to remind the viewer of the mystery and darkness surrounding vampires.”

Bryan tries to mix mystery with reality to create “cool styles that you would see on students in school.”

Next on Bryan’s to-do list is developing a line of sandals, which is something she has always wanted to pursue ever since she attended Pratt Institute.

“Back then, I was told I had to intern in Italy for five years! So I shelved that idea, but now I’m going to do it – with all the technology in the footwear industry and computer-aided design, I don’t think I have to intern with a little shoemaker.”

For Bryan’s fans, we’re grateful she won’t have to take a five-year absence to see what fresh creations she has up her sleeves.