The End of Obamania?: Looking Beyond Obama’s First Year 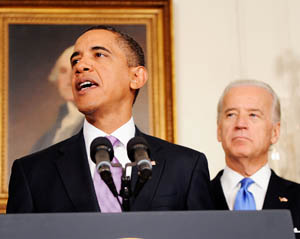 After taking office on Jan. 20, 2009, President Barack Obama held a strong overall approval rating of 69 percent among American adults – a score that placed him 30 percent above President George W. Bush’s last ranking on the Presidential Approval Index. As Obama’s first year in office came to a close on Jan. 20, 2010, however, approval ratings had fallen sharply, his total approval rate down to 48 percent. Weeks later, the numbers continue to fall out of his favor.

As his second year began, telephone polls found that only 30 percent of Americans held confidence in Obama’s ability to follow through on health care reform, a priority issue that helped carry him into the White House in 2008. Obama’s plan for reform was set to include the end of insurance rescission and discrimination for pre-existing conditions, elimination of the Medicare “donut hole” gap in coverage for medication, a cap on out-of-pocket expenses and a coverage mandate for large employers.

But Obama’s wishlist for health care reform is being narrowed in the ongoing debate between House and Senate, who have agreed to subsidize insurance and prevent the denial of coverage for pre-existing conditions, but whose disagreement over a public health option is creating a barrier to perhaps the largest change at stake, overall reform now at risk due to the addition of Republican Scott Brown (Massachusetts) to the Senate, and the recent death of Pennsylvania Rep. John Murtha (D), which may mean one less vote for reform in the House. If and when it passes, health care reform will likely come in a much more watered-down form than the plan Obama had initially put together, very much a Democrat’s effort.

However, Obama has done much for health care in the meantime; one of his first accomplishments, on Feb. 4, 2009, was the signing of the Children’s Health Insurance Reauthorization Act, which continued health coverage for seven million American children and extended coverage to an additional 4.1 million. He also enabled the American Recovery and Reinvestment Act (ARRA) to take effect, which created a 65 percent subsidy for seven million unemployed relying on COBRA, invested $19 billion in health information technology and placed $1 billion in prevention and wellness programs, an attempt to reduce long-term health care costs related to treatment by funding studies and promoting immunization to minimize the risk of people getting sick in the first place.

Obama’s June 2009 signing of the Family Smoking Prevention and Tobacco Control Act was another step toward preventative measures in health, requiring that flavored cigarettes and youth marketing on behalf of the tobacco industry be banned, and that graphics and warnings would occupy 50 percent of any tobacco product’s packaging.

After receiving $8.2 billion in Recovery Act funding in January 2010, the National Institutes of Health awarded an extension of $18.3 million to researchers for S.T.E.M. Education grants, which are being used to invest in math and science education, a longterm attempt at piquing student interest so that the United States may eventually become more independent and internationally competitive in areas like medical research and alternative energy development.

The President spent a large portion of his Jan. 27 State of the Union address discussing economic revitalization, but brought to light the importance of education as investment by giving mention to student loan forgiveness. Working to help the U.S. boast the highest number of college graduates in the world by 2020, his Administration is aiming to increase the affordability of higher education by permitting college loan debt forgiveness after 20 years, or 10 – for those college graduates who go into a public service. He is also pushing the Senate to pass the American Graduation Initiative, a $12 billion initiative announced in July 2009 that seeks to gain five million additional college graduates by 2020, and would allow for an expansion on Pell grants. And his 2011 budget would invest an additional $1.35 billion in the Race to the Top program, which aims to reform education on a state and local level.

To boost the economy and attempt to promote healthy international trade, Obama’s address mentioned the National Export Initiative, which will allegedly provide or maintain two million jobs in the U.S. and assist small businesses and farmers with business by doubling exports to foreign countries over the next five years.

Also within his budget for the year is a proposed tax increase of more than $2 trillion over the next 10 years for businesses and families making over $250,000 per year. He also plans to extend tax cuts for middle-class families in order to decrease the gap among households, though such cuts would add to the government’s deficit in the long term, and will cut tax breaks for oil companies.

Obama has made several attempts, in his first year, toward tolerance at home. In October 2009, he signed the Ryan White HIV/AIDS Treatment Extension Act, an act of bipartisan legislation which provides care and support services to areas heavily impacted by HIV and AIDS, and simultaneously lifted the HIV entry ban, which in 1987 was set to prevent HIV-positive travelers and immigrants from entering the country without a waiver.

Also building on a theme of tolerance, Obama proclaimed Jan. 16 Religious Freedom Day, an attempt to bring new emphasis to the 1786 Statute for Religious Freedom, undoubtedly used – in modern day context – to lighten the stigma against Islam in the U.S. that has built since 9/11.

In December 2009, he ordered the acquisition of the Thomson Correctional Center in Thomson, Illinois, so that it would become a U.S. Penitentiary and allow the transfer of detainees from the Guantanamo Bay Naval Base. According to the BBC, more than 40 terror suspects have been transferred out of the facility during Obama’s first year, while nearly 200 detainees remain, as domestic opposition to housing them on U.S. ground has become a barrier to his desire to shut down the facility completely.

Certainly, Obama’s approach to terrorism is where he is most greatly drawing criticism from previous supporters; he has submitted somewhat in his wish for the government to claim Osama bin Laden, declaring that the United States is somewhat effective in its tactics if we have reduced bin Laden to hiding without communication to the outside world. Yet bin Laden, believed to be hiding on the border of Pakistan and Afghanistan, claimed credit, in an audio statement released Jan. 24, for a failed Al Qaeda attack on Dec. 25, and Al Qaeda has taken to making greater use of suicide bombers, which has only forced U.S. airlines to spend additional effort and funding on new security measures.

Additionally, Obama’s timetable to withdraw U.S. troops from Iraq, set in February 2009 with the intention of bringing home all combat troops, or approximately two-thirds of troops, by August 2010, and all troops by 2011, has only been offset by his December announcement to deploy 30,000 new troops to Afghanistan. While new forces are intended for government stabilization and the prevention of a Taliban gain on momentum, new plans for Afghanistan mean that troops will not begin to return to the U.S. until July 2011, with complete withdrawal only in sight by the end of the President’s first term.

With regard to Iraq, Obama joined Vice President Joe Biden in a recent meeting with Iraq’s Sunni Vice President, Tariq al-Hashimi, to discuss progress prior to an upcoming general election, but with a current ban on candidates who support Saddam Hussein’s Baath party, a lack of reconciliation means U.S. withdrawal may be threatened.

The President has also given Russian President Dmitry Medvedev cause for concern; with the 1991 Strategic Arms Reduction Treaty having expired in December, the two are aiming to develop a treaty successor that would improve Russian-American relations, particularly after Russia’s war with Georgia two years ago. Yet Medvedev’s negotiations with Obama, which come months after the U.S. President decided not to deploy a missile shield in Poland – a plan leftover from the Bush Administration – also come alongside worry from Russian armed forces chief of staff Nikolai Makarov, who believes that Obama’s revision to missile shield plans in Europe are a threat to Russia.

Obama claims that this is not the case, yet this issue still prevents a treaty from being formed. Alternately, Obama has also chosen not to reinstate North Korea on a list of countries deemed by the United States to be state sponsors of terrorism, a list from which President Bush had removed North Korea in order to maintain stability with a country recently conducting nuclear and missile tests.