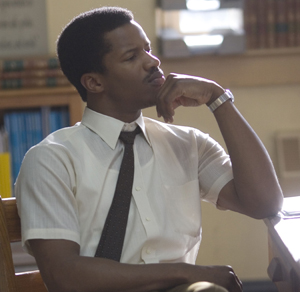 “It’s not impossible to change the world, and I don’t think the many heroes that came before me had thought it was impossible either,” says Nate Parker.

The actor, activist and intellect is referring to a real life hero whom he portrays in the movie Blood Done Sign My Name, an inspirational civil rights drama set in the 1970s that recounts the aftermath of the murder of Henry Marrow, a 23-year-old African-American Vietnam veteran who was killed by a prominent white businessman in Oxford, N.C.

A true story based on a novel of the same title by Duke University professor Timothy Tyson, Parker plays a 22-year-old Benjamin Chavis, the burgeoning activist who decided that the best way to protest the injustice was to organize a peaceful march to the state capital. Gathering the incensed Oxford natives, what begins as a small group of Marrow’s outraged friends and relatives grows to become a crowd of thousands for a three-day, 50-mile march to Raleigh, N.C.

Chavis, who later went on to become the youngest head of the NAACP (National Association for the Advancement of Colored People), urged the black population of Oxford to use its economic power to boycott the white businesses that had taken advantage of them and provided a platform for Parker, who makes no qualms of his attraction to period pieces to enrich his knowledge of black history.

“My character [Chavis] was the medium between all the different emotions after Marrow’s death. You had some guys running through the city breaking things. You had the students who didn’t know what to do. You had the judicial system that wasn’t giving anyone any answers and what he succeeded in doing was creating solidarity,” says Parker.

The 30-year-old Norfolk native and former computer programmer, who stumbled into acting after a Los Angeles talent agent discovered him, has had a remarkable career. He was specially selected by Denzel Washington for the role of Henry Lowe in The Great Debaters, a movie that snagged him an NAACP Image Award nomination for Best Actor.

Now one of the most promising young actors to have recently emerged on the film scene, Parker played the male lead in Rome & Jewel, a hip-hop take on Romeo and Juliet and also starred in the movie Pride, about an African-American swim team. Recently, he played the love interest of Alicia Keys in the movie The Secret Life of Bees and appears alongside Oscar nominee Terrence Howard in George Lucas’ upcoming production, Red Tails.

A Penn State graduate who is also committed to using his role as an actor to represent positive male images within the black community, Parker picks his projects very carefully and was particularly attracted to Blood Done Sign My Name because of its powerful message.

“It deals with civil rights in the 1970s, and I was attracted to this movie because of the dynamics of the story. It’s a true story where the director was a slave to the book in many ways,” Parker says.

The book – written in 2004 by Tyson, who was 10 years old when the events occurred – is an engaging memoir and has sold over 150,000 copies and won numerous accolades, including the Southern Book Critics Circle Award and the prestigious University of Louisville Grawemeyer Award in Religion. Tyson, whose father served as a minister to the city’s all-white Methodist Church in Oxford, saw firsthand the injustices that plagued the city when his father tried to integrate the church. He initially wrote this epic story of empowerment in the South as a thesis while in college.

“The events happened over the summer just before I turned 11,” says Tyson. “The next year we integrated the schools, and it was really violent and crazy. We had a group called the Rights of White People meeting in the park across the street from where I went to school, and there was just a lot of insanity. I was very interested in figuring out how things had gotten that way, so I started it when I was a freshman in college and went back to Oxford and interviewed Robert Teel, the murderer, who is a friend of my father’s and thus began the journey.”

Stuart, whose father was also a Presbyterian minister in the South, was drawn to the book, which he felt paralleled his own life.

“I had been raised in what was commonly known as a ‘New South’ household, meaning it was pro-civil rights and like the Tyson’s, respect for blacks was paramount,” claims Stuart, who captures the book’s essence in examining Marrow’s murder and its aftermath from multiple points of view.

“The title [Blood Done Sign My Name] worked perfectly for me,” continues Tyson. “Blood evokes murder. It’s also a short hand, which we use for race and family. It’s very much a story about different families who have these complicated legacies, which collide. When we sign our names, we are making a commitment, and it’s about a commitment that generations of Southern blacks and whites have made to make a declaration of independence.”

“What moved me most in Blood,” adds Stuart, “was the heroism and accomplishments of the true heroes of the Civil Rights Movement. Not the great names, but the soldiers of the movement, like Ben Chavis, Vernon Tyson and the women of Oxford who stood up to incredible challenges to create change.”

A story of the struggle to attain civil rights, Blood Done Sign My Name gets inside the passion of race relations in America, and while many may argue that a tale about criminal injustice and deep-rooted Southern values has been explored before in numerous flicks, Parker, a major star in the movie, is quick to dispel those arguments.

“First of all, civil rights is not over,” says the actor. “The movement has not ended. A lot of black issues are rooted in these cliché civil rights movies, and if it means me using my platform as an actor to do these types of powerful movies, then that’s what I am going to do. Being a person of color, the activism has to be a part of my very platform. There is no other way.”