Two Thumbs Up: The Wolfman and Shutter Island 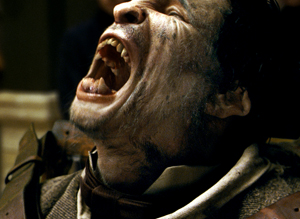 I recently had the privilege of seeing a couple of films that were really awesome. Both had elements that gave me the awesome gooey feeling inside that you get when you know you’re watching the work of artists who are putting in serious work and aren’t just collecting a paycheck. More specifically, each film had elements that inspired me to gush about.

First up is Shutter Island directed by Martin Scorsese and starring Leonardo DiCaprio. Before I start, let me just get one thing out of the way: Scorsese is arguably the best filmmaker of all time.

Here’s a man whose craft has never stopped getting better the more films he makes. There are directors whose craft and film grammar have fluctuated throughout their careers, but Scorsese has always been one of those guys who regardless of whatever criticism someone might have about the actual movie, there’s no disputing the passion that was put into it.

When Scorsese talks about film, you can tell that he’s still just as passionate about it now as he was when he was just starting out. When you’re watching one of his films, you forget that a large part of the film industry has become a machine that polishes turds and uses marketing wizardry to peddle it to the masses. Anyone who has anything negative to say about Martin Scorsese can guzzle rat poison piña coladas.

Now that I got that out of the way; Shutter Island is fucking awesome. And aside from the fact that it is so well written, directed, acted, etc., the film is in many ways a heavenly marriage between Scorsese and Alfred Hitchcock. The nature of the story and the mystery of it is definitely something that Hitchcock would do if he were here making films today, and Scorsese channels him in ways that pay homage to him and build upon his style.

Also, DiCaprio’s work in this film is inspired. His collaborations with Scorsese are my favorite performances of his, and this one is definitely up there.

So much of this film is 10 times better that most of what’s out there. There are movies, and then there are films. This is a film. So while you’re sitting there drinking your rat poison piña coladas and talking smack about Scorsese, I might just happen to walk by and “accidentally” spill a big bowl of scalding hot soup all over you.

I can’t say enough about casting really great actors in these kinds of movies. People generally go to movies like these to see the effects, but when you cast actors like Del Toro, Anthony Hopkins and Hugo Weaving, it brings the piece up to the level of being something of high merit, and not just a “kill two hours effects movie.”

Director Johnston masterfully blends practical makeup on a real actor, and a computer generated werewolf to the point where sometimes you don’t know which is which. That’s when you’re making it work for you. I haven’t seen practical effects and computer effects used together this well since Doc Ock in Spider-Man 2.

I don’t know about everyone else, but I’ve become very bored with computer-generated effects, so watching this movie was refreshing because I felt like I was actually looking at a real wolfman. This film has me excited to see what Joe Johnston does with Captain America.