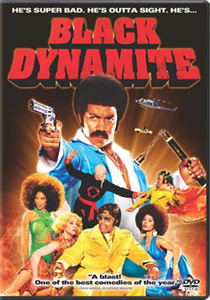 Funny Business: One of the best spoofs since Airplane!, Black Dynamite sends up ’70s blaxploitation flicks. Michael Jai White (Why Did I Get Married?) stars as the titular nunchuck-wielding ladies’ man taking down the jive turkeys that killed his brother. Arsenio Hall co-stars.

Chris Rock sets out to explore the world of African-American hairstyles as only he can in the documentary Good Hair. Making appearances are Eve, Ice-T, Maya Angelou and Al Sharpton.

Best known for his tales of Rick James’ megalomania in “Chappelle’s Show,” long unsung comedian Charlie Murphy takes center stage in his first standup special, I Will Not Apologize.

Also available: One Hot Summer, based on the bestseller

The Idiotbox: HBO’s The Life and Times of Tim: The Complete First Season is one of the funniest animated debuts since “South Park.” Fans of Adult Swim will appreciate the deadpan absurdity.

Before breaking through in the U.S., Clive Owen made some great British television. Owen stars as a detective slowly going blind while trying to solve a brutal murder in Second Sight: Complete Collection.

A dedicated LAPD officer relocates his family to a tough inner city neighborhood in the hour-long drama Lincoln Heights: The Complete First Season.

After his son is murdered, a Los Angeles private eye comes out of retirement to catch the killer in Barnaby Jones: Season One. The long-running series, which premiered in 1973, starred Buddy Ebsen as the elderly, milk-drinking P.I. and Lee Meriwether as his daughter-in-law/assistant.

The Horror! The Horror! A flesh-eating virus spreads through a high school prom via bottled water in Cabin Fever 2: Spring Fever. The over-the-top sequel strings together a series of gross-out gags that we won’t go into here, but which will please gore-comedy lovers.

A slice of California’s serial killer legacy comes to life in Freeway Killer, the true story of William Bonin. During the ’70s, Bonin traveled the highways picking up hitchhikers and leaving them mutilated and sexually assaulted.

The Vault: Mickey Rooney: The Long and the Short of it. This six-disc collection, the latest in the Legends of Laughter Collection, contains 14 of the short stature entertainer’s films, spanning his long career, including two Mickey McGuire shorts, an episode of “The Mickey Rooney Show,” a “Playhouse 90” drama, “The Comedian” and a WWII short.

Under the Radar: Moral relativism is at the heart of Austria’s Oscar-nominated Revanche (Criterion Collection). Alex, an ex-con, dreams of one last heist so he can start over with his prostitute girlfriend. But she is killed in the robbery attempt, which turns Alex’s thoughts to revenge. It’s a deliberately paced, slow burn of a crime drama, which explores some heavy themes.

Audrey Tautou stars in the rags-to-riches tale of the legendary fashion icon in Coco Before Chanel.

Shot guerilla style on the streets of New York, festival favorite The Pleasure of Being Robbed arrives on DVD. The low-budget comedy follows a scrappy and spontaneous pickpocket around the city.

Blu Notes: Oscar-nominated performances stand out in two new Blu-ray releases: The Last King of Scotland and Walk the Line. In the first, Forest Whitaker plays the mercurial Ugandan dictator Idi Amin, as seen through the eyes of his personal physician (James McAvoy). The latter stars Joaquin Phoenix as the Man In Black, Johnny Cash, as it chronicles his romance with June Carter (Reese Witherspoon).

William Friedkin’s ’80s action classic To Live and Die in L.A. stars C.S.I.’s William Petersen as a Secret Service agent on the trail of a ruthless counterfeiter played by the intense Willem Dafoe.