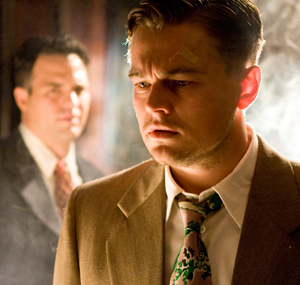 In a world where everyone and their sister is a filmmaker of some renown, it’s great to see a legend like Martin Scorsese still going strong. The Academy Award-winning director guides a star-studded cast in the thriller Shutter Island. Leonardo DiCaprio stars as Teddy Daniels, a U.S. Marshal sent to investigate the disappearance of a female patient at a federal institution for the criminally insane. Along with his new partner, Chuck (Mark Ruffalo), Daniels hits roadblock after roadblock during his investigation. This includes the strange ambivalence of the institution’s head, Dr. Cawley (Ben Kingsley).

Still, Daniels isn’t the least bit deterred. He fights tooth and nail to get to the bottom of all the bizarre goings-on within the hospital, while battling his own troubled past. As he probes through the mysterious Ashecliffe Hospital, he begins to see visions of his deceased wife, Dolores (Michelle Williams). She tries to warn her husband of the impending dangers he will face if he continues on his quest, but it’s to no avail. Before Daniels realizes it, fact and fiction are completely blurred, and he’s left questioning loyalties and his own professional abilities.

Shutter Island is the best that film noir has to offer. DiCaprio is compelling as the tough-talking, badass protagonist. He is a perfect fit with every member of the supporting cast, especially Williams.

From the costumes to the cinematography to the overall art direction, each frame of this film stands alone as a masterpiece. Though the book on which it was based was a top-seller in 2003, there has been a lot of Internet buzz over whether its cinematic counterpart can live up to the original. Thankfully, it does.

Scorsese’s artistry is evident. But the best aspect of Shutter Island is how the suspense and climax are interwoven in one of the most satisfactory displays that moviemaking has to offer. Not a second of tension is misplaced or misguided. Shutter Island’s plot will be a great joy for those who haven’t read the book and a happy visual surprise for those who have.