Tupac Shakur: The Life and Times of an American Icon 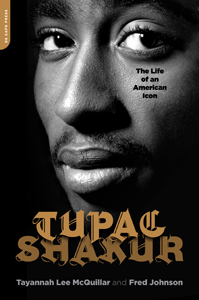 Some might argue Tupac knew death was knocking at his door. He talked about it and rapped about it as if it were imminent. That didn’t make his passing in 1996 at age 25 any easier on his fans.

The controversial rap star meant more to hip-hop than most emcees. He was political, outspoken and proved to be a conscious leader when he wasn’t embroiled in beef.

Dr. Fred Johnson, Associate Professor of History at Hope College, and Tayannah McQuillar, author of When Rap Music Had a Conscience, chronicle the life of this American hero, from his rough-and-tumble childhood to his phenomenal fame and, ultimately, to the gangsta-style drive-by in Las Vegas that took his life.

There are so many high and low points in Tupac’s life that make him fascinating, which are hinted at in the book’s chapter titles: Nonviolence Is a Dead Philosophy, Baltimore School for the Arts, Jada and John, Shock G, Interscope, T.H.U.G. L.I.F.E., Poetic Justice, Puffy, Biggie, Above the Rim, A Shooting in Atlanta, Me Against the World, The Shogun of Death Row, Inmate No. 95-A-1140, Piggie and Buffy, The Second Shooting, The Notorious P.I.S.S.E.D., The Third Shooting, Goodbye.

Though he seemed to attract danger and death, his smile seemed to suggest love and life. His on-screen persona was magnetic, as Rolling Stone’s Peter Travers wrote about him in 1992’s Juice. It has been said that director John Singleton wrote the lead of 2001’s Baby Boy for Tupac. At the time of his passing, Tupac was on a cinematic roll: Bullet, Gridlock’d, Gang Related. He had one foot on Hollywood’s red carpet and one foot on heaven’s doorstep. His was a tough part to play; because being the bad guy with a quick tongue made him famous, yet it was also his ultimate downfall.

Since his death, five posthumous albums have been released, scoring a total of eight Top 10 hits. Tupac’s legacy lives on: Read all about it.


Tupac Shakur: The Life and Times of an American Icon is currently available.
Article posted on 2/16/2010
This article has been viewed 4958 times.