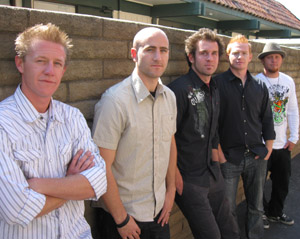 “The songs flow into each other like a timeline or clip of one’s life,” says LeDonne. “In the end, The Big Picture comes around full circle, reflecting back on one’s life and seeing the positive in it as if through the innocent eyes of a child. If you’ve ever found something worth sacrificing for, experienced the overwhelming feelings of guilt and regret or struggled battling your own weaknesses you will be able to relate to this album.”

And oh yeah, the album rocks out, too. Hear for yourself when Chaser plays a CD release show at the Lava Lounge at Dipiazza’s in Long Beach Feb. 26.

We Are The World: Clay Stones

Echo Park band We Are The World couldn’t possibly have foreseen that the 25-year-old charity single “We Are The World” would be remade this year and in the news at the same time that they’re trying to promote their debut album, Clay Stones. It remains to be seen whether the coincidence is a promotional godsend or nightmare for the band, but those who give a listen won’t in any way be confused.

We Are The World, the band, specializes in trance-y electronica filled with primal rhythms played out with heavy bass lines, and you’d never mistake their music for an all-star vocal number featuring the likes of Pink and Lil Wayne. Clay Stones drops Feb. 23 through Manimal Vinyl Recordings and WATW will have a Thursday night residency gig at the Echo beginning April 1.

Upcoming country superstar Jason Aldean has been added to the lineup of the 2010 Stagecoach Country Music Festival that pulls into the Empire Polo Grounds in Indio a week after Coachella. Aldean joins a list of mainstream country, roots rock, bluegrass, folk and alt-country acts scheduled to appear that includes Sugarland, Brooks & Dunn, Toby Keith, Bobby Bare, Merle Haggard, Black Prairie, the Avett Brothers and Phil Vassar, to name but a few.

The big hoedown takes place April 24-25 and tickets are now on sale. Find all the details at stagecoachfestival.com

This year’s Take Action! Tour is now in full swing, and the annual compilation CD that accompanies the tour has dropped. A portion of the proceeds from sales of the two-CD Take Action Volume 9 from Hopeless Records/Sub City will benefit the Driving for Donors organization, a non-profit that seeks to raise awareness of the need for bone marrow donors.

More than a dozen previously unreleased tunes adorn the 34-cut package and included are contributions from We the Kings, Mayday Parade, Hit the Lights, Frank Turner, Cobra Starship and 3OH!3. There For Tomorrow, named last year as one of the “100 Bands You Need to Know” by Alternative Press Magazine performs an acoustic version of “Backbone” on Vol. 9, and they’ll also be one of the feature bands when the Take Action! Tour makes a stop at the House of Blues in West Hollywood Feb. 21.

Singer-songwriter Rob Laufer is preparing to release a new album called Excruciating Bliss. The Tarzana native spent his teen years jamming with guys who would go on to be integral members of Captain Beefheart’s Magic Band, he played the George Harrison spot in the original production of “Beatlemania” and he sang in Cheap Trick’s production of “Sgt. Pepper Live” during its two-week run in Las Vegas last year.

Excruciating Bliss drops on April 6, but you don’t have to wait that long to hear Laufer in action; catch the pop journeyman at the Silverlake Lounge Feb. 24.

The Soundtrack of Our Lives

If you enjoyed the recent Communion album from the Soundtrack of Our Lives, you’ll be happy to know that they’ve just released a new digital-only three-song E.P. called Immaculate Convergence. The Swedish stars play the Glass House in Pomona Feb. 25 and at the El Rey Feb. 26.