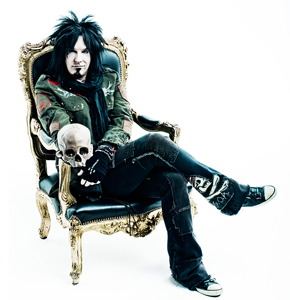 He was a young child raised by a single mother-turned-teenage-vandal before founding one of the most popular rock bands in music history.

Now, he is tuning into his “Sixx Sense,” and he is hoping music lovers across the country will join him in doing the same.

The rebel and Mötley Crüe founder enters the next phase in his life as Nikki Sixx launches his nationally syndicated radio station.

“First and foremost, it’s the music,” Sixx says of his show. “It’s a balance of host providing good music and audience trust. That is a very important relationship for me, and I think the listeners get that.”

Distributed by Premiere Radio Networks and already being transmitted in more than 30 Rock/Alternative radio stations, Sixx says his Internet-based radio show uniquely balances promising new talent and what he feels is great music. Even more, he says following “Sixx Sense” on the Web will give listeners a chance to escape.

“Broadcasting over the Internet and the appearance of the studio is very important to me. When you go into Sixx Sense Studio in Los Angeles, you will immediately be transported to another place,” Sixx excitedly says. “This is not the station across the street.”

To that end, Sixx humbly says he hopes to put his stamp on the program in order to make it successful.

“I’m not putting on a character; this is who I really am,” he says. “I can’t project why or if my show will be successful. I’m doing this because I love it. This is not a money gig for me.”

To share in Nikki’s passion, be sure to tune into “Sixx Sense” Monday through Friday, from 7 p.m. to midnight (and the weekend program the “Side Show with Nikki Sixx,” available Saturday and Sunday, from 6 a.m. to midnight), on sixxsense.com. Sixx is joined by co-host Kerri Kasem, daughter of Casey Kasem.