There for Tomorrow: Everyday Musicians 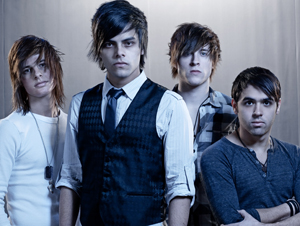 There for Tomorrow has stepped up its game for audiences on the Take Action! Tour.

We see it all too often on tabloid covers and E! News specials, young stars led astray by the more unsavory vices available behind the scenes in the entertainment industry. Young, fresh-faced teen singers and actors one day, drug-addicted, boozed-up, orange-hued and going commando in public the next. Unlike the horror blind items referencing some of their contemporaries, though, the young men of There for Tomorrow would rather do without the excess.

Not to say they don’t get into their share of innocent trouble along the way, but guitarist Christian Climer, bassist Jay Enriquez, drummer Chris Kamrada and vocalist Maika Maile prefer to be observant learners when possible. Playing tours big and small since the release of last year’s A Little Faster, the Florida-based rockers have had the unique opportunity to do a lot of their growing up on the road. While exposure to the rock ’n’ roll party lifestyle on a daily basis might lead some lesser bands to burn themselves out prematurely, the foursome have seen more than their share of examples of what not to do when you’re a band on the road.

One of the big experiences for the band was their stint on the entirety of the 2009 Vans Warped Tour, which proved to be eye opening for both Maile and Climer.

“Being first-timers on Warped Tour is like being at a party with your pants off, but you didn’t know it,” says Climer with a laugh.

Expanding on this, Maile adds, “We went into it thinking way differently that we should have. We though you’d just set up and things would smooth over, but Warped Tour is you looking like a jackass in 95 degree weather.”

Despite the stress of being on one of the most physically and emotionally demanding national tours around, or perhaps because of it, Maile confesses the tour was a big growing up experience for him. But then, that’s likely a natural progression when you go from playing for less than 50 people a night with three other bands to having an audience of a few thousand and are on the road with over 50 bands at any given time.

“I went through a ‘finding myself’ stage on it, and I feel more confident in who I am now,” says Maile. “Just seeing how people act, and how people shouldn’t act, you learn from the good things and the bad things.”

Echoing this, Climer adds, “It’s a good time though. There are a lot of good people there, and some not so good people, just like everywhere else.”

Without them going into specifics, it’s apparent Maile may have had his share of dealings with the latter when he says, “This song is for all the bullshitters,” before launching into the fast-paced and very pointed track “Sore Winner” during his band’s set.

“It’s about all the people that just have too much to say. Winning is cool, but feeding people more bullshit than they already get is not the most favorable thing,” he says. “You can tell when people have a façade and are just trying too hard.”

Though his intentional vagueness with his words works as a diplomatic function, Maile’s similar approach to songwriting serves another purpose as well.

“I don’t really get specific about things because my music and lyrics are the only way I can vent,” he says. “It’s a lot of scattered thoughts, but it all fits in one idea. It’s not like the bands who say, ‘Well I had this melody idea, and ‘I miss you’ fit into that.’ It’s not that,” he adds, maybe only half-jokingly.

“My favorite part of being in a band is the writing,” Maile continues. “Some of our songs, we wrote when I was like, 16, but hopefully people can get that we’re serious about what we do. The way we write our songs, what we talk about, that we have a message behind what we’re saying, we’re not just talking about dancing with 13-year-old girls at a club or something.”

While many bands posture about only writing music for themselves and not letting the opinions of others influence their work, the members of There for Tomorrow have a different stance. While many take the approach that outside motivation is a bad thing, these guys write, record and perform with the intent that audiences will connect to their music and take something positive from it.

“I hope [fans] know they’re as much a part of this as we are,” says Maile.

“We want everyone to have that family feeling because there are a lot of people out there who aren’t spoken for. We’ve all been in that situation before,” he says. “All we’re doing is putting our lives out there, not as an example to look up to or anything, just telling what I know and playing what we know. We’re not going to get up there and bullshit and talk about things we don’t know about at all. We want people to feel welcome.”

And in the time since the album’s release, Maile admits to having seen an increase in the intensity of the responses he gets from fans with attachments to particular songs or lyrics, only further validating his efforts.

“They’re all just different parts of the way I think, so it’s hard for me to shine light on just one,” says Maile when asked about any particular favorite songs of his own from the band’s repertoire.

“If I wasn’t in the band and they weren’t my lyrics, I’d probably say ‘Deathbed’ is really special. It’s just got something epic about it,” says Maile.

Indeed, the quintessential power ballad of A Little Faster has all the makings of a mainstream hit, so it shouldn’t be any surprise that track is slated to be the band’s next single and follow-up to the album’s title track. But just because you’ll be hearing the song and seeing the yet-to-be-shot video everywhere you go soon enough this year, doesn’t detract from the band’s commitment to honest songwriting.

“Anybody that knows me knows I put myself and my views about things out there for a reason. It’s kind of selfish when people get too opinionated about other people’s opinions, as oxymoronic as that is,” says Maile.

With a laugh, he continues, “And it’s not like I’m John Mayer or anything.”

“Hopefully every time is a fresh performance because it’s hard out on the road for us sometimes,” says Maile. “We can be as tired as possible, and we still have to get up there and do our thing. Hopefully kids can take an experience away and have a connection with us, rather than it be just them watching a band.”

And for this time out as part of Hopeless Records’ annual Take Action! Tour, Maile also promises that his band has stepped up its game for audiences.

“For this tour, we’re trying to just give a power set. No stopping, talking, bullshitting, just get right into the songs with a few interludes,” he says.

But don’t expect a monotonous performance, either.

This mentality and approach to performance is something the band members try to carry into all aspects of their lives, not just the music-related ones. While many of the bands they’ve shared stages with and are often compared to find comfort in escapism and trivial subject matter, Maile is much happier with introspection and intellectualism.

Not what you would expect from a band guy in the prime of college age, right? It’s all part of Maile’s master plan.

“Understanding yourself will help you understand everyone else,” says Maile. “It’s a hard game to play with your own soul, like chasing yourself around in a circle trying to catch your tail.”

But if there’s one thing the members of There for Tomorrow have proven in the last year and a half, it’s that a little hard work is the last thing that scares them these days.

“I realized after Warped that you’re only going to receive as much as you put into it. How hard you work is going to reflect what you get in return,” says Climer.

As proof of the symbolic meaning their journey has held, Climer opted to have his commitment sealed in tattoo form after completion of recording the album, now bearing on his arm the neon fast-forward emblem that serves as one of their current logos. Maile, on the other hand, has yet to have an opportune moment to do the same.

“I’m waiting for the epiphany of where to put it,” he jokes.