I Am David: (Lions Gate) 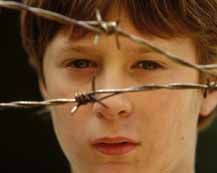 The most wrenching moments in I Am David are the silent ones.

Anguish is evident in the haunting eyes of David (Ben Tibber), a 12-year-old boy in a labor camp, as he is told he can trust no one. Even more powerful is the look on the face of Johannes (Jim Caviezel), an adult prisoner, when he realizes that David has stolen a bar of soap and it will take the ultimate sacrifice to save the child from death. It would be sadly ironic if this moving film got lost in the Hollywood holiday hoopla, as getting lost is the fate of young refugees like David every day.

Paul Feig directed and adapted his spare script from the acclaimed book by Anne Holm. Holm took pains not to make the details of where and when the story takes place too specific. Feig sets the story in a Bulgarian prison camp in the 1950s, but by focusing his camera on faces and the emotions they reveal, he maintains the universal elements of the story. David doesn’t know how he got to the camp or why, although he is tormented by snippets of memories. He recalls a woman screaming as he is separated from her. Could it be his mother? In the camp, Johannes looks after him but answers few questions. One day, David is called into an office and handed a mysterious sealed letter. He is told he must make his way across Europe to Denmark. He is told how to escape. And he is told not to tell anyone anything.

It’s a perilous trip – a Great Escape by one boy that involves digging under barbed wire, dodging guards, sneaking onto the backs of trucks and on and off boats, and swimming to shore in the chilly darkness before dawn. But David finds that the most dangerous elements of his journey involve sizing up people. Is the command to “trust no one” the best advice to follow? Should he make an exception when a kind Swedish artist (Joan Plowright) offers him refuge?

Once the action leaves the camp, Feig turns his camera on the beauty of the countryside and manages to slip in humorous moments. A man discovers David stowed away on the boat and worries that he’s looked at his magazines. A frantic woman grabs David and makes him deliver a basket of wine to a party. A guard laughs and lets him cross the Swedish border after being told David is trying to take over the country. “Just remember to give us all pay raises when you take over,” he shouts after him.

The performances of Plowright and especially Caviezel give heft to David’s journey of understanding, as what he learns about the people he meets helps him piece together the puzzle of his past. The film implies more than it spells out, and the ending is a bit abrupt. But it also leaves you with the lingering scent of truth.