Dios: We Are Dios 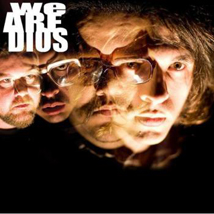 Who are Dios? Dios are Dios! And, finally, We Are Dios is done by Dios. Back in 2004, no less an icon than Ronnie James Dio sent the band a cease-and-desist letter because, well, his act was and generally still is known as Dio. The similarity of the names led him to believe that fans might confuse this indie collective of psych-rock folksters from Hawthorne with his high-voiced heavy metal highness. So, they changed their name to Dios Malos (because who would want to get on the wrong side of Tenacious D’s muse?) and made two records and an EP, each one exploring another corner of the psychedelic sonic labyrinth.

Now, with their original name rightfully restored, they return with a bigger and even more layered production. Early demos showed them to know what is groovy on tunes like “Bust Out the Candy” and “All Said & Done,” which they remade for their debut in 2004. The band showed an early knack for catchy melody, obscure humor and a Laurel Canyon cool shared by bands like Beachwood Sparks. If Brian Wilson, an obvious influence, co-wrote songs for Fly Ashtray, it might sound something like Dios. The opener “Epileptic Tunnel Visions” shows a wistful surrealism that carries on throughout. But don’t let the funny phonetic gotcha moments of songs like “Ay Don Wanu Meri Yu” or “Don B Efrey Du Die” fool you, this band is serious about their mission to get songs stuck in your head.