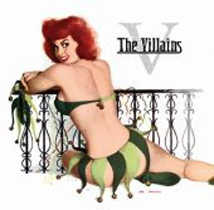 The Villains self-titled release sounds real. When I say real, I mean as if the distributors of the wonderful Pro Tools computer program missed their Atlanta delivery. In that sense, the eight-song disc is refreshing compared to the robotic, over-produced recordings of today.

The opener, “Let’s Forget About Tonight,” is an upbeat beer-toting track that sounds like the Eagles’ “Take it Easy” being covered by pretty much any current country radio star, minus the giant recording budget. “Party’s Over” and “Just Another Saturday Night” are stories of love on the rocks which carry memorable vocal hooks that are carefully draped over traditional country chord progressions.

With multiple lead singers, the storytelling and consistent classic-country rock sound is what ties the disc together. Although the underlying lyrical topic of love lost, love missed and love on the brink of heartache dominate the album, the songs are still twangy, upbeat and catchy.

This is a record that documents a posse of six southern gentlemen telling stories and jamming in the studio – all while throwing back a couple beers in the process. The Villains are a no frills, Eagles-loving, twangy classic rock band. And their self-titled debut follows that standard, old-school approach to record making.


The Villians is currently available.
Article posted on 2/16/2010
This article has been viewed 1162 times.