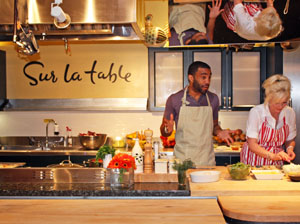 How many of you watch Bravo? Everyone knows that cooking competition shows are just about the hottest thing on cable, and when “Top Chef” comes on, I know I’m rushing to my couch to see what the cheftestants are whipping up this week. But that’s not what it’s like in real life. No, in real life, chefs aren’t limited in their inspiration, nor do they have to cook under such massive time constraints. And many of them go to class. Enter Bravo’s “Chef Academy,” a show that attempted to mix “Top Chef” with something closer to reality.

In the show, nine students struggle to pass the course at award-winning chef, Jean-Christophe Novelli’s new culinary institute, the Novelli Academy in Venice. But here our cheftestants aren’t pitted against each other. Instead, they attend what seems like a relatively normal cooking class every week and they must fight against their own doubts to cook the dishes Chef Novelli teaches them and pass each week’s test. The catch is that if any student fails three tests, there will be one less chef on the show. So there are no cliffhanger elimination rounds, there’s no shared housing and there’s no drama. … Right?

The magic of the show actually exists with the people on it. There’s Chef Novelli, the Frenchman with a very picky palate, Emmanuel DelCour, the porn-star-cum-chef (also French), the sassy black guy, Leo Goodloe and Suzanne Winn, the bubbly Orange County housewife (no, seriously). And although the finale aired last month, Leo and Suzanne, at least, are certainly refusing to let that be the last word on the matter. In fact, these two – the man with the least fails and the only chef to be eliminated from the Academy, respectively – have formed an unlikely friendship. Odd though it might seem from an outside perspective, when they teamed up to give a cooking demonstration at Sur La Table in L.A., their combined energy was immediately noticeable – with banter like, to quote Winn, “a pair of old broads.”

“What you probably don’t know,” says Winn, is that Goodloe “was in a culinary institute in Italy for a couple of years and I have traveled to Italy several times, so we make a fabulous duo because we both have that Italian connection. While Goodloe and Winn prepare tomato Crostinis with goat and Fontina cheeses (yum!), they start dropping some of the tips and tricks they learned from Novelli.

“I know generally when I do sauces, I always started with olive oil until I started with Jean-Christophe,” reveals Goodloe. “He took away the olive oil and added it at the end. Totally changed everything.”

“And that also goes for your garlic,” adds Winn. “I was always told with your garlic and your onions, you chop them up and sauté them in olive oil. No! It’s really way more flavorful and you really get that true essence of garlic if you smash it and add it at the end. Just pour some olive oil over it and it makes a big difference. I’m an old school girl so when you can talk me off the edge of oil and butter, you’re doing something right.”

As they progress to making honey-soy sauce chicken skewers with mango salsa, Winn reveals the secret to her own success as a chef.

“When someone wants me to make something and I’ve never made it before, I’ll download like eight recipes off the Internet and I’ll take elements from each and make, like, the recipe on steroids,” says Winn. “Most of the time it works out pretty good, sometimes not so good.”

The pair moves through curry chutney turnovers (hands down, the best thing I ever ate … and I’m totally a dessert girl) and finally on to the crowd-pleasing chocolate pots with butterscotch and whipped cream, revealing tips, tricks and show secrets along the way. I could repeat them, but I’d have to kill you.

While they love cooking together, a Suzanne/Leo show isn’t (yet) in the works. For the time being, Goodloe is a personal chef to a “private household” (you know that’s code for celebrity), while Winn’s culinary talents are mostly showcased at her dinner parties and to the beneficiaries of her own Meals in Heels program, but you can catch Goodloe guest starring in Winn’s YouTube cooking demos.