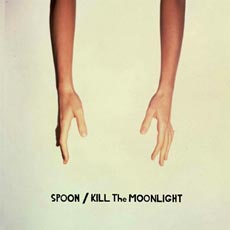 Touring for rock shows can be fun, exciting, and unpredictable, but life-threatening? Frontman Britt Daniel of indie-rock band Spoon recalls a specific time when drummer Jim Eno placed the band in jeopardy.

"We were driving in our van one time, and our wheel fell off while we were going downhill," says Daniel over the phone in his tour van. "He (Eno) was actually able to pull the car onto a side street that was kind of going uphill, so we were able to stop the descent."

Not that Daniel harbors any resentment towards Eno. Despite the fact that Daniel and the rest of the band have spent nearly every waking minute together touring in support of their new album Kill The Moonlight, Daniel says that the band does not get into fights…well, at least, not intentionally.

"Sometimes we have to share a bed, and I don’t like that very much because I get kicked a lot," explains Daniel

Tight accommodations are just a small price to pay for the Austin, Texas band, which continues to gain popularity with an ever-increasing and dedicated fanbase. Spoon’s new release is their fourth album, Kill the Moonlight, a mellow blend of rock and pop delicately layered with unusual sounds and humble beats. The new album is a slight departure from Spoon’s previous albums, with less emphasis on guitar, bass and drums and more on keyboards and studio effects.

Daniel says that the instrumental change was a gradual one. "When I was arranging the songs, what I do is, I listen to where the song is going and I just kind of try to think what would make this song work, and lots of time for this record, that ended up being keyboards."

"Every record’s been a little bit different, but this one is slightly more out there, than the last one," he continues. "On the last one, we were trying to make a traditional pop record, and this one is a bit more rock."

Although Daniel is credited for writing all of the songs on Kill the Moonlight, he admits that creative differences are always a challenge within the group. "It’s sort of survival of the fittest. It kind of depends on who wants their teeth more. If you really want stick by your ideas, then you might have to fight for them… I’m missing some teeth."

Daniel and the band do agree completely on the importance of making quality music as a sign of success. "I don’t think success is a bad thing, I think making bad records is a bad thing."