“Why Torture Is Wrong, and the People Who Love Them”: Now-March 14 @ Stella Adler Theatre 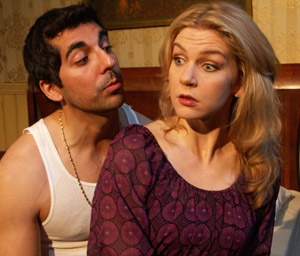 Sunhil Malhotra and Rhea Seehorn in “Why Torture Is Wrong, and the People Who Love Them”
(Credit: Rick Baumgartner)

I am a sucker for romance and politics, and I firmly believe in serendipitous moments. Last Friday, I was on my way to “Why Torture is Wrong, and the People Who Love Them.” It was pouring and what should have taken 21 minutes (according to the always reliable Google Maps) took an hour and a half. With only five minutes remaining, I fortuitously found parking and ran as fast as possible to the theater, grabbed my ticket, took my seat, turned off my mobile and made it right on time to hear the director give his spiel. He looked really familiar.

Sobered up yet distraught, Felicity runs to her folks with hopes that maybe they can help her find a way out of this one. Her mom, Luella, brilliantly played by Christine Estabrook, is your not-so-typical housewife; she wears different colored versions of the same dress, knits and is obsessed with theatre. Her father, Leonard, is the cliché, extreme right-wing American obsessed with his gun collection, violently upholds his ideals, while hiding an adulterous relationship. Spying, plenty of confusion and lack of information lead to one man’s torture and call for a whole new ending.

Playwright Christopher Durang and this amazingly talented group of actors had me laughing so hard it hurt. Once I regained my composure, it suddenly came back to me. About a year ago, on another rainy night in Los Angeles when I was rushing and barely made it to the theater on time, I saw “Dickie and Babe,” another fantastic work by the same director: Daniel Hennings. I knew I recognized the director and his work because his is some of the best theater I have experienced in my five years living in Los Angeles. He sure makes rushing to see a political satire on a rainy day worth it.