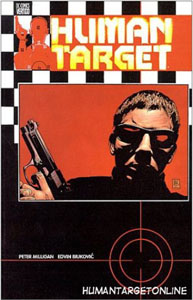 In time for the FX TV series, Vertigo is re-issuing Peter Milligan’s action comic Human Target. Christopher Chance is the Human Target. He becomes people whose lives are in danger in order to turn the tables on their would-be assassins.

Chance immerses himself in every aspect of his client’s life, down to the way they think, so as to be as convincing as possible. Aside from the real threat of bodily harm, he must deal with the psychological ramifications of losing himself in other people’s lives.

In the first arc, a South Central preacher stands up to violent street gangs. In the second, a jaded screenwriter kidnaps a former child star and extorts his family.

Milligan deftly blends action, espionage, narrative fake-outs and the psychological aspects of his characters for a dynamic series.


Human Target is currently available.
Article posted on 2/16/2010
This article has been viewed 1398 times.