The Losers, Volumes One and Two 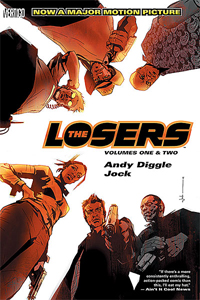 Before the big screen adaptation inevitably butchers it, check out Andy Diggle’s action-packed espionage graphic novel. Diggle and artist Jock, the team behind the fantastic Green Arrow: Year One, serve up a relentless tale about a block ops team that was targeted by its own government and left for dead. Now, the Losers are back to settle the score.

While it doesn’t leave too much room for character, Diggle’s writing is sharp and convincing as he delves into the world of shadowy CIA operations and international drug running, while rarely stopping to take a breath. Jock’s visceral, high contrast artwork is solid throughout.

This new release collects the first two volumes into one trade paperback.


The Losers, Volumes One and Two is currently available.
Article posted on 2/16/2010
This article has been viewed 1544 times.