Kings Hope for a Quick Break 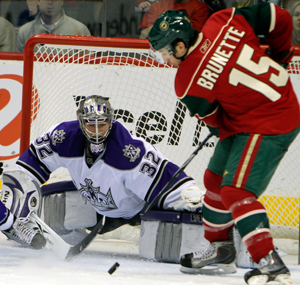 Most Angeleno sports fans probably cannot answer many questions about the Kings’ individual milestones or records of the past, let alone identify team alumni other than Wayne Gretzky or Luc Robitaille.

Of course, Kings’ fans old enough to remember the days before protective head gear remember Mario Lessard as the goalie in the famous Miracle on Manchester playoff game in April 1982.

Nostalgia aside, Lessard, who spent his entire NHL career in Los Angeles, landed in the team record books when he won 35 games during the 1980-81 campaign, a mark that stood for nearly 30 years. On Saturday, current net-minder Jonathan Quick stopped 22 shots en route to shutting out the Colorado Avalanche, 3-0, to earn his 35th victory of the season, tying Lessard’s mark.

With the NHL taking a two-week hiatus for the Winter Olympics, Quick will have to wait to stand alone in the Kings’ record book. Still, with 21 regular season games remaining, an injury-free Quick will obliterate Lessard’s record soon enough.

All the while, Quick maintained an air of humility when Campus Circle informs him he tied Lessard’s milestone.

“If I’m in there 90 percent of the games, I’m going to have a lot of opportunities to win games,” Quick, who started 55 of the team’s 61 games, said in response. “But those are team wins, and every one is a team effort. Obviously, I owe a lot to the guys working in front of me.”

Kings head coach Terry Murray told Campus Circle he was not surprised by Quick’s record-tying performance on Saturday, saying his net-minder has been disciplined and determined all season long.

“His consistency has been a big part of his growth this year,” Murray stated. “It takes a lot to be doing what he does.”

How much more will it take for Quick, who also leads the NHL in wins, to be the first King goalie with 40 wins?