The Good Guy: Will Alexis Bledel follow her head or heart? 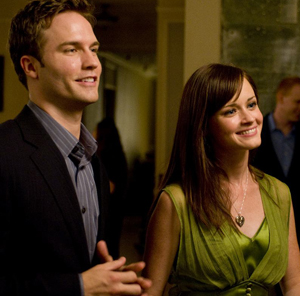 Scott Porter as Tommy and Alexis Bledel as Beth in The Good Guy.
(Credit: Walter Thomson)

These five words punctuate one of the most poignant disses in cinematic history. In The Good Guy, Alexis Bledel (“Gilmore Girls”) plays Beth. She’s a young Manhattan female with a good job, close friends and a career.

The only thing left for this cosmopolitan lady is to land Mr. Right. Sounds easy, but hold up...

However, a wrench in the gears soon comes in the form of Tommy’s co-worker Daniel (Bride Wars' Bryan Greenberg). Beth must learn to separate fact from fiction, love from infatuation and the good guys from the bad. Once she does, she delivers the aforementioned kiss-off with the sterling glare that any heartbroken girl should.

On a sunny winter day in Los Angeles (65 degrees, to be exact), Bledel and the film’s director enter the Four Seasons hotel to discuss their labor of love. Bledel is stunning in a nude-colored, romantic chiffon dress –giving off a maturity years older than her numerous teen-friendly characters. She begins to discuss – with great passion – what drew her to The Good Guy.

“Beth felt very real to me,” she explains. “The things she wants in her life are not very hard to imagine.”

The Good Guy is directed by Julio DePietro. He, too, was once an investment firm hustler, so his insight into this world is firsthand. DePietro was incredibly careful to portray the lives of his subjects, as well as New York City, with as much love and respect as possible.

“I felt like I was in a unique position to give an insider view of that industry, while at the same time commenting on the state of modern relationships –i.e., dating in the big city from a male perspective,” he says. “I also wanted to make it funny and sweet, not your typical indie downer, because I want people to see and enjoy it.”

He took full advantage of the New York City’s vast landscape, setting a number of scenes in locations that may be a bit foreign to most, including his cast.

“The Cloisters was probably my favorite [location] because I didn’t even know it was there,” admits Bledel.

Production proved an interesting feat for everyone involved. The cast, including co-stars Aaron Yoo (The Wackness) and Andrew McCarthy (“Lipstick Jungle”) bonded over their material and took cues from their onscreen counterparts by forming literary attachments with each other. Since the characters in The Good Guy are fairly well read and urbane, it wasn’t a stretch that the cast and director would share their love of the written word as well.

“We talked about books a lot on set,” says Bledel.

She even gifted DePietro with a novel during the wrap party.

As for Porter, The Good Guy marks another in a long line of career-propelling roles that will surely solidify him as Hollywood’s next leading man. Although his character isn’t the most honorable dude a girl could bring home to mom and dad, the guy who’s playing him is the exact opposite. For that reason, Porter really wanted to sink his teeth into his part.

As for the ups and downs that Tommy faces, as well as the ones he forces upon others in the movie with his wayward player actions, Porter is philosophical.

“I think in this movie everybody gets what they deserve,” he says with a sly smile.

With his character’s philandering tendencies in high swing, Porter, Bledel and Greenberg still manage to display fiery onscreen chemistry with one another. Luckily, it was all a matter of kismet.

“I joined the project pretty last minute, so when that happens, you sort of just hope for the best,” says Bledel.