Break is Over: Time to Buckle Down 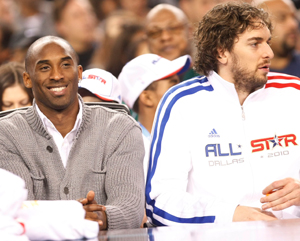 Kobe BryantAll-Star sat out the All-Star game Feb. 14 but should return in time to face the Celtics.
(Credit: Ron Jenkins/Fort Worth Star-Telegram/MCT)

All-Star break has come and gone, and the Lakers have just 27 more regular season games to go (16 away and 11 at home) before playoff action begins. Although the team is at the top of the Western Conference with a 41-13 record, now is definitely not the time for any of its players to be resting on their laurels.

Cleveland is No.1 in the league at 43-11, and in this next week, the Lakers meet two challenging opponents. Forward Luke Walton could be out for the rest of the season with back problems. Center Andrew Bynum remains day-to-day due to a hip injury, and has not played since Feb. 8, but should return to the lineup. Kobe Bryant sat out the All-Star game to rest his sore ankle, so he should be back in action.

While Bryant and Bynum were sidelined, the rest of the squad fared quite well against three conference rivals. Feb. 6, they pulled off a 99-82 victory over the 31-24 Trail Blazers. Then, the bench mob showed up in full force for a resounding 101-89 win over the 30-21 Spurs Feb. 8 at Staples. The team put on quite a show in one of the toughest venues in the NBA with its 96-81 victory over the 32-19 Jazz at EnergySolutions Arena.

The team hosts 32-18 Boston on Thursday. The Lakers narrowly defeated the Celtics 90-89 Jan. 31 at TD Garden and need a healthy Bynum to help keep Kevin Garnett under control.

Tuesday, the Lakers travel to Memphis to face the 26-25 Grizzlies. Look to the L.A. squad to make a strong statement as redemption for its Feb. 1 93-95 loss at Memphis.