Percy Jackson: You Have to Work Hard for Your Fantasy 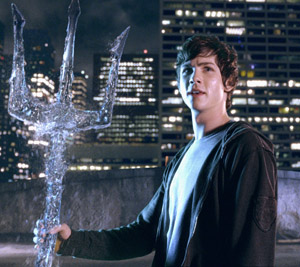 Percy Jackson & the Olympians: The Lightening Thief came in at No. 2 at the box office over the Valentine’s Day weekend, dropping behind the star-studded cast of (appropriately) Valentine’s Day and squeaking past the much-talked-about gothic horror remake The Wolfman.

The film is based on a popular series of books by author Rick Riordan, and concerns the adventures of a young man who learns he is the offspring of the Greek god Poseidon. He is subsequently hauled off to a training camp for demigods and learns the ins and outs of his powers. Eventually, he and his group of friends head off on an adventure to save mankind from an apocalyptic war.

The film is the first in what could be a possible franchise for 20th Century Fox, and the production was helmed by none other than Chris Columbus, the man that helped usher in Warner Bros.’ well-known fantasy franchise, Harry Potter. Comparisons between the two franchises are to be expected, and certainly inevitable.

Logan Lerman stars as the titular hero, and he was nice enough to chat with Campus Circle while visiting New York.

What is it like having to do so much publicity for such a big movie?

It’s still fun. I mean, this is a fun part for me. It’s kind of like therapy for the movie. You discover things you didn’t discover beforehand, too. So I love talking about the film.

What did you think of working with Chris Columbus?

It’s great. He’s a director that I’m just crazy about. He’s so talented, obviously. I love his work, you know? His movies have shaped my childhood so much and have really stuck with me my whole life. I just wanted to be a part of another Chris Columbus classic, and I think we really accomplished that.

So, you’re looking forward to a sequel?

Oh, yeah. I’d love to make the whole series, love to do all five. Just hoping it does well and 20th Century Fox greenlights No. 2, then we can go from there.

The film has a remarkable cast, including Pierce Brosnan, Catherine Keener, Steve Coogan and Uma Thurman. What was it like working with such a diverse cast?

It was a lot of fun. They’re all really fun actors, actors I love so much. It was cool to have a little routine of, you know, every two weeks you get to work with someone else, and such different characters. It just made for a good time.

Such a large-scale movie must certainly have its challenges, so what was the most difficult aspect of the production?

The sword fighting sequences were pretty hard. They take a lot of confidence in the people you are working with, and you just kind of have to go out there and do it. A lot of the time when we were doing them we’d learn all these huge fight sequences and then train for a long time on them, and then we’d get to set and change it all in a day, do something completely different. They were definitely a challenge to do and to pull off, but you have confidence in the people you train with.

And who was this trustworthy swordplay expert?

Don Lee. I give him all the credit. Don Lee and our stunt coordinator, Bobby Brown, and everybody, they really helped us out. I give them all the credit to helping me look good.

How long did it take to learn these intricate fights?

So audiences can look forward to a lot of action?

This is a big action flick.

Percy Jackson & The Olympians is currently in theaters.
Article posted on 2/18/2010
This article has been viewed 2371 times.