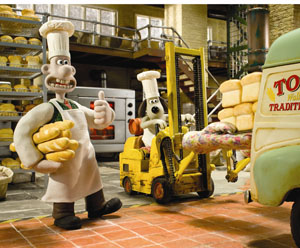 A Matter of Loaf and Death will make you a Wallace and Gromit fan.
(Credit: Aardman)

If I could do a song and dance on paper, then I would just to show my adoration for the completely commercialized night that exploits the billion-dollar industry. And I say that with utter love and respect.

I’m sure all you fellow AA addicts have also mounted a makeshift countdown calendar for the big day. I’m sure you’ve even seen everything that’s nominated, including the ones that took a little more searching to find in a theater.

But I will bet my bottom penny that there is one category of films you haven’t seen, not because you don’t care. I know you care. You haven’t seen these because there really is nowhere to see them.

I don’t mean the documentary films, although those are tough cookies to catch as well. No, I’m talking about the short films, both animated and live action. Forgot they have two categories all to themselves? That’s what I thought.

To preface what I am about to say, I’d like you to know that I am full-length feature type of gal. I like the 90 to 120 minutes of dialogue, characters, narrative, action, suspense, climax, denouement and resolution.

I don’t (or didn’t) believe that an entire story could be told in approximately 20-30 minutes. Well for a change, I went out of my way to watch all 10 of the shorts.

This was a decision that changed my entire outlook on the category of the short film. Not only can an entire narrative fit in the allotted time, but it’s almost refreshing. To be honest, by the end of a two-hour feature, I’m sometimes itching to leave my seat and leave the tedious story in the theater. After seeing all 10, I definitely have my favorites that I hope will win the big statue in early March.

A Matter of Loaf and Death is another installment of Wallace and Gromit that is funny, clever and completely enthralling. It is Nick Park’s fourth short to star the duo in a mock murder mystery. Wallace and Gromit get started in a new bakery business; but fellow bakers are dropping dead like flies. Wallace finds love in Piella Bakewell, a bread lover who may have too much enthusiasm for the profession.

This Wallace and Gromit short falls in line with Park’s previous creations. I am now a huge fan.

It is so incredibly hard to choose because Wallace and Gromit’s fellow nominees are all very impressive as well. The Antonio Banderas-produced The Lady and the Reaper takes a new spin on death as a comedy, and the witty little film Granny O’Grimm’s Sleeping Beauty shows that every kid’s nightmare stems from somewhere in their blood. In this case, she gets it from her grandmother.

As for live-action, I’m torn between Kavi, a story that takes place in India and exposes modern-day slavery in the nation’s slums, and The New Tenants, which is a Tarantino-esque drama about a couple who unknowingly moves into a whole mess of drugs, adultery and trouble.

Now that I’ve convinced you to become as passionate about short films as I am, I am now also granting you the opportunity to see them all on the big screen. Running through March 4, the Nuart Theatre is happily offering audiences several chances to see the Best Animated Short and Best Live Action Short 2010 nominees.

These films are usually difficult to see, but now viewers have a rare opportunity to get a leg up in their office pools. Though separate admission is required for each, two feature-length programs will be shown – one for the live action nominees and one for the animated nominees.

Don’t guess this year. See the shorts for yourself, and you may find that you like them more than you thought you did.