The Rocket Summer: From the Heart 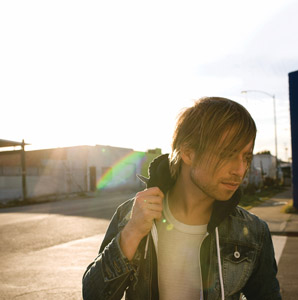 It’s been a long time coming for the release of the Rocket Summer’s fourth full-length album, Of Men and Angels, which wrapped recording last April.

“It’s almost like a weird dream at this point because it’s taken so long for it to come out that it’s this surreal thing. It’s like, ‘Oh, yeah, this album’s coming out,’” frontman Bryce Avary confesses. “It’s been the biggest thing in my life for the past year and half, because I wrote most of the songs in 2008.”

As a result, Avary describes the time spent on the record as both the easiest and hardest musical endeavor he’s undergone: “It was easiest in terms of the fact that I was in a very healthy state musically where I was playing really well. I was singing well, and I felt like almost a different person than the past couple of records have been. It felt like so much creativity was in my court.”

“It was hard,” he pauses. “It’s not even something I enjoy talking about, why it was hard, but we did this record with some crazy changes with people on our team. There was a lot of stuff, music business things. Especially the way I do it where I play everything on it, that’s an extreme endeavor, and it takes a lot of blood and sweat. Some days I would get in my car after being in the studio and in my head be like, ‘Am I even making a record right now that’s coming out?’”

Eventually the logistics were ironed out and, as Avary points out, it’s better late than never. Coinciding with those difficulties was a slight change in Avary’s approach to writing, as he opted to strip things down to the bare essentials.

“I wanted to make a record that had a bit more substance,” he says. “I think that there’s substance on my other records, for sure. When I say I wanted to strip some things away, I just wanted to strip away this pressure of writing hits for hits’ sake.”

“These days everybody is co-writing with everybody else, and people are having other people write their songs. To the powers that be, it’s really just all about hits,” he continues. “Don’t get me wrong, I love hits. I’m a hit kind of person, to be totally honest, and I feel like you can probably pick up on that by listening to my songs, but with that said I don’t want to forfeit integrity. I want to write from my heart and make a record that’s really going to move someone, regardless if it’s sold millions of albums or not.”

Over the course of his professional musical career, which started with his indie debut Calendar Days in 2003 at the age of 20, Avary has earned the reputation as one of the industry’s nicest and most upbeat artists.

“I have this perception of being this ridiculously happy-go-lucky, super cheery person, and I think that comes from the fact that our singles were songs like ‘So Much Love’ and ‘Brat Pack,’” he admits. “Sometimes that perception is a bit weird, especially to me. It’s not a bad reputation, I guess, but it’s definitely a bit off from reality.”

“When I put out my first record, Calendar Days, I wrote that when I was a junior in high school. I love those songs and I think they’re great, but I’m a little bit older now,” he laughs. “I’ve experienced more and you go through hills and valleys, as the song would say. This record touches on a lot of that, and it’s a pretty spiritually charged album. It’s still very optimistic and a very joyful album. It’s just real.”

All of it boils down to what Of Men and Angels is about, which Avary believes can be summed up in a single word: love.

“Basically nothing matters unless you’re genuinely loving one another,” he says. “We can be saying all the right things, we can be believing all the right things, but if we’re not loving the people in our lives it’s really pointless. It was just something that laid heavy on my heart, and I think it’s a bit of a challenge for me, if anything, that whole concept.”

For the moment, however, Avary is more than anxious to see how the release will go over.

“I think it’s going to awaken some new feelings because this album’s been a while coming out,” he says. “After such a long year of trying to get it to come out, it’s going to be a very healthy thing to experience the fruition of that and see what our fans think about it. It’s going to be a beautiful thing.”