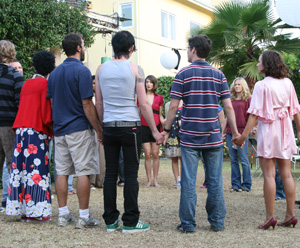 In recent years, the teen comedy has become taboo, synonymous with cheap laughs and awkward, over sexual punch lines. Amidst the flurry of content-lacking films for the genre comes a real gem, an indie flick called The Last Hurrah. Following the last party for graduate philosophy majors, this film reminds audiences of what has since been lost from the high point of ’80s filmmaking.

Jonathan Stokes, the film’s director, writer and producer, spearheaded the project. It is no surprise, having been a philosophy major himself, that this film hits the philosophical mark so many of today’s films don’t even realize should be a target within the genre.

“I was really drawn to this idea that on the last day of camp, or the last day of the semester, everyone acts differently,” says Stokes. “Everyone has the guts to go and say how they really feel about people, for better or for worse, because the stakes are lower. They’re going to be gone the next day.”

The film is very much based on Stokes’ image of what an ideal party would be for him.

“You know, you go to parties, and you end up having the same sorts of conversations with people, over and over,” he says. “But if you write, you can make up your own parties!”

This movie feels like a party. Perhaps the greatest draw to the film is the manner in which it was shot. We aren’t jumping from the backyard, to the driveway, to the store in the blink of an eye. It’s all told in one continuous shot. The viewer truly feels as if he is walking through this party, progressively getting drunker as the night goes on.

“The style of narration was very much inspired by Richard Linklater,” Stokes shares. “The other [influence] would be Woody Allen. I love his style of dialogue. I wrote a lot of this dialogue to be, you know, a lot of fast-paced one-liners. A lot of philosophy.”

Of course, shooting a film in one continuous take would come with its own unique challenges. The initial obstacle being coordinating a film crew around a party filled with extras. Even more interesting were the limitations of the equipment, as they could only shoot 30 minutes at a time.

“We built into the choreography, about every three minutes, there’s some sort of a ‘save game’ point where we could’ve cut if we needed to,” Stokes says. “The thing is that we didn’t end up having to use a lot of them, which is good! We had to keep the actors in the moment. If it was daylight, we couldn’t waste daylight. Those characters had to do the entire party every single night.”

And how many nights does it take an entire cast and crew to play out a feature film? Five. Not even completing the film on the first night, the performances and crew choreography improved day after day until finally, on the fifth night, the shoot came together.

The movie is very much theatrical play, carefully captured on film. While most filmmakers would shy away from this style, for Stokes, it came quite naturally. Having a background in improvisational theater, he knew if he had the right actors, it could work.

Of Will, the film’s starry-eyed protagonist (played by Zack Bennett), Stokes comments, “I wish I could take credit for the naturalness of Zack’s performance, but he was that natural from his first audition, all the way through shooting.”

And of Jason, the film’s egotistical woman hunter (played by David Wachs): “The character is very much an amalgam of best friends of mine growing up. People watch the movie and assume that’s what David Wachs is really like, but he’s a sweetheart! Completely different from how he is in real life. It was amazing watching his transformation as he gradually inhabited his character.”

After a chaotic shoot and a tenuous year of post-production, the DVD finally hits shelves this week. What is this first-time film director, producer and writer’s response to the idea of seeing his work on shelves?

“It’s amazing,” says Stokes. “In this very difficult market for independent film, we felt very lucky that anyone would take a look at us whatsoever for distribution. We really beat the odds, I think, and we’re very grateful.”

The Last Hurrah is currently available.