The Informant!, The September Issue and More 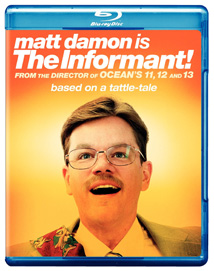 Funny Business: Prolific and versatile director Steven Soderbergh returns with The Informant! Inspired by a true story, the film follows Mark Whitacre (Matt Damon) as an agri-business executive turned FBI informant who blows the whistle on an international price fixing conspiracy. But as the case develops, the overeager Whitacre’s overactive imagination and delusions of grandeur begin to affect the case. Scott Bakula and “Community”’s Joel McHale co-star.

Paul Weitz (American Pie) directs the adaptation of Cirque du Freak: The Vampire’s Assistant. The film centers on Darren, a young man who becomes involved with a freak show filled with magical creatures and a vampire, played by John C. Reilly. Soon Darren wishes to become a vampire himself. Salma Hayek and Willem Dafoe co-star.

The Horror! The Horror! Director Richard Kelly (Donnie Darko) adapts Richard Matheson’s short story (already a “Twilight Zone” episode), The Box for the big screen. Cameron Diaz and James Marsden star as a married couple who receive a mysterious box that will grant them a million dollars but kill someone they don’t know. Frank Langella co-stars.

Ghost Hunters: Season Five, Part 1. Plumbers by day, Ghost Hunters by night, Jason and Grant travel the country investigating reports of the paranormal. This season has the team at the Betsy Ross House, the Garden State Asylum, Star Island and an Atlanta aquarium where the staff have been reporting disturbances around a display of wreckage from the Titanic.

Stranger Than Fiction: Based on historian Howard Zinn’s immensely popular A People’s History of the United States, The People Speak brings to life the words of Americans who spoke for social change, from Muhammad Ali to everyday workers. A long list of celebrities read poems, speeches and letters. Bob Dylan and Bruce Springsteen perform songs by Woody Guthrie. Zinn narrates. The DVD includes 20 minutes of never-aired footage.

Examined Life is a fascinating documentary for people interested in philosophy but who don’t necessarily want to slog through volumes of dusty rhetoric. Director Astra Taylor (Zizek!) accompanies several modern thinkers, from Cornel West to Peter Singer and Michael Hardt around places that are evocative for them and their modes of thought as they discuss their views on the world. There should be more films like this.

The Universe: The Complete Season Four explores all of the staggering mysteries of space in stunning CGI recreations and HD NASA footage, from wormholes to the myriad ways the Earth could end.

The September Issue is an intimate look at Vogue’s legendary editor-in-chief Anna Wintour.

The latest spin-off in the long running “Stargate” franchise, SGU Stargate Universe: 1.0 comes to DVD. The series follows a team lead by Robert Carlyle (28 Weeks Later) that is transported to an ancient ship irreversibly programmed to travel the universe setting up stargates.

Made in Japan: Dragon Ball Z: Dragon Box 2 includes episodes 43 to 84 of the legendary anime series, remastered, uncut and in the original Japanese. Then go back to where it all started with the original series, Dragon Ball: Season Three.