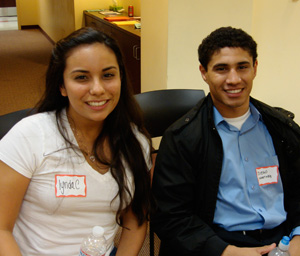 Universities always boast a commitment to diversity. This is made especially noticeable when brochures are mailed to prospective students showcasing ethnically mixed individuals sitting in a circle, holding hands, stopping short of singing “Kumbaya.” Many schools go as far as having “diversity” divisions within their office of student affairs to tailor to the needs of these groups. Wonderful as that may be, how many times are the needs of a different student population addressed? Enter the world of first generation college students, the ones who are often overlooked in university programming.

The University of Southern California is no exception to the school described above. However, Llisa Williams, Internship Advisor for the Career Planning and Placement Center, is doing something to support the group of students that account for several thousands of USC’s population.

In the fall of 2007, Williams started a series of workshops that were held twice each semester to highlight issues of importance to first-generation students. Noticing that a lot of students came to these events, she brainstormed on how to make a more solid program.

The following year, the pilot for the First Generation College Student Mentor Program debuted with 25 mentors and 25 mentees. Mentors (who are first generation USC alumni) and mentees have to go through an application and interview process in order to be considered for the program. This year, there is a 20:20 ratio of mentors and mentees.

Alum J. Juan Macias, LCSW, who first came to USC as a graduate student pursuing a Master of Social Work, feels the program has given him the opportunity to return some of the favors granted to him throughout his college experience and career.

“Being the first Latino in my immediate family to attend college was not always easy,” he says. “Fortunately, there have been countless people who have helped me along the way and the mentorship program has given me the privilege to do the same for others.”

The program meets once a month for professional development workshops, with past topics including résumés, interviews, professionalism, networking and career day preparation; however, the main focus is the first-generation experience. It is the responsibility of the individual pairs to communicate and meet outside of these workshops.

Diego Martinez, a senior in mechanical engineering, was interested in the program for a tangible reason: “I really need to get an internship this summer and I wanted someone to share their experience with me so I had an idea of what to expect when approaching an interview.”

Sophomore Dy Phi, a double major in political science and communication, enjoys the mentorship program because “it isn’t a one-day networking event. It’s a year-long commitment that enables each student to create a lasting connection with an alumnus.”

It is this lasting connection that Williams strives to help develop between the pairs, but also within USC itself.

“The university needs to find and address the needs of other populations on campus – there’s more to just race and gender groups that need attention. I am hoping it will become a staple here,” she says.

Schools around the nation should also pay attention to their first-generation students; a quick Google search will show that programming for them is lacking. Hopefully, other colleges will look at USC’s program and will be inspired to do the same.

USC alumna Debbie M. Page, attorney at law, welcomed the opportunity to give back to a fellow Trojan. However, health issues affected the amount of time she was able to spend with her mentee. In an effort to work around these limitations, Page and her mentee often exchange text messages.

“One highlight of this experience for me was when my mentee sent me a text stressing about her fall final exams,” Page shares. “I told her to give me a call if she needed to talk, and she did. I felt like she needed support and encouragement, and I sincerely hope that my words made her feel better and stress a little less.

Speaking as Debbie’s mentee, I can say that those words truly did make a difference, and it’s programs like this that leave lasting impressions on any student’s life.