“The Female of the Species”: Now-March 14 @ Geffen Playhouse 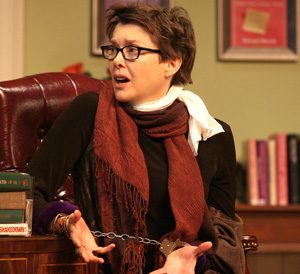 Annette Bening in “The Female of the Species”
(Credit: Michael Lamont)

They say that when a director casts his or her ensemble well, 90 percent of their job is fulfilled. Let’s just say director Randall Arney has great intuition and amazing luck with “The Female of the Species.”

First off, he gets Annette Bening to play the dramatically frantic feminist author Margot Mason, who in the midst of a pressing deadline for her next book gets an unexpected visitor. Molly, played by Merritt Wever, we quickly learn is an old student of Margot’s and claims to be a huge fan of her work until she pulls out a gun.

Truth be told, she hates Margot and her writings (Molly’s mother was the fan of Margot’s work, so much so that she abandoned her daughter Molly in pursuit of her feminist ideals – one of the many reasons she wants revenge on this author.). In the midst of the pleading and begging for her life, and while the captor slips away to make hot tea, in walks an exhausted and delirious mother of three, Tess (Margot’s daughter), wonderfully played by Mireille Enos. Both daughter and captor gang up against Margot, who is handcuffed to her own desk. As the chaos unfolds, we are introduced to the endearingly charming Bryan, Tess’ husband, played by David Arquette, taxi driver Frank and publisher Theo.

The performances were the best I have seen since I moved to Los Angeles from New York. Of course, Bening gave the powerhouse performance I anticipate every time I witness her work (both on stage and on screen – loved her in “Medea”). Arquette totally blew me away with his performance because it was so unlike the characters I’m used to seeing him portray.

The remaining cast members were just as brilliant, in particular Enos. At one point in the show she had the audience laughing so hard we could not help but applaud her delivery. This is simply great theater!