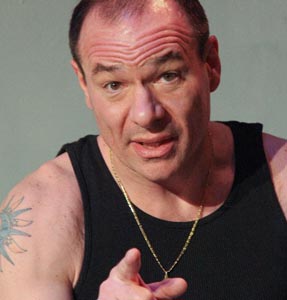 Cris D’Annunzio’s engaging one-man show “Digging Up Dad” opens with dirt flying in the air. Lights illuminate a small mountain and a cemetery backdrop as Cris’ head pops up out of a grave.

The story is incredibly funny and said to be based on actual facts; Cris’ father, who remains nameless, mysteriously dies from a drug overdose leaving behind $250,000. But there’s a problem. His father was only a small-time hood who, while a heavy drinker, never touched drugs. The mysterious circumstances surrounding his father’s death seem to indicate mafia involvement.

“Digging Up Dad” doesn’t exactly follow the Aristotelian play structure; instead, it’s a powerful and profane one-act monologue. The show is basically Cris’ biography, a story he tells us as he takes a much-needed break from uprooting his father’s tomb – as the title suggests. This tale is an emotionally aggressive chronicle that begins with Cris’ upbringing in an Italian-American family and finds its heart while exploring a tumultuous love/hate (but mostly hate) relationship with his abusive father.