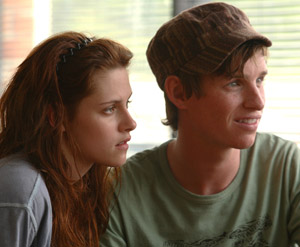 The ancient Mayans used the color yellow to mean “ripe” or “precious.” The legendary first emperor of China, Huang Di, was more commonly known as the Yellow Emperor. Only members of the royal family were allowed to display the color yellow in their buildings and garments.

Of course, the color yellow also has a derogatory meaning derived from our own American history. In the late 19th and early 20th century, the term “yellow journalism” came to refer to the exploitation and distortion of the news by writers looking to sell more papers.

However, Lance Armstrong used the color in his LIVESTRONG campaign. Now, yellow has taken on a new connotation: It references courage, strength and persistence.

In this case, persistence is exactly what it stands for.

Brett Hanson (William Hurt) has just been released from prison where he spent years doing time for a murder he didn’t mean to commit. Unsure how to lead a normal life post-jail, Hanson meets Martine (Kristen Stewart), a teenage girl looking for someone to return her affections.

But rain destroys any plans the group has of crossing the county borderlines. Instead, they head to a small hotel where secrets are revealed. Martine is not as hard as she makes herself out to be, and Gordy is as delicate as he appears.

However, it is Brett’s story that keeps his traveling companions enraptured. As it turns out, Brett was once married to his soulmate, May (Maria Bello). The couple lived happily by the river until a miscarriage inflicted a sticky estrangement culminating in his imprisonment and their divorce.

Despite separation, Brett still loves May. And the dozens of yellow handkerchiefs that decorate her boat represent her persisting love for him as well.

The film is not perfect. The story only begins to unravel halfway through the piece, and the teen characters are stereotypical and underdeveloped. Its predominant redeeming quality is the love story at its core, which cultivates the idea of that imperfect, unforgettable passion that always drives us back where we belong.