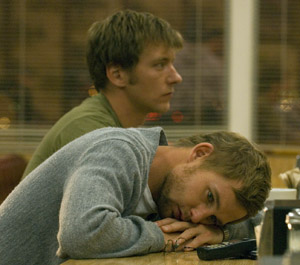 Love can be a daunting thing, and trying to find someone you love who loves you back can be even more overwhelming. Love is something most are looking for. First-time director, Kyle Patrick Alvarez, brings us a poignant film about feeling disconnected with the ones we are closest to, but having the ability to connect with a complete stranger.

Based on an autobiographical article for GQ Magazine entitled, “What are You Wearing?” by Davy Rothbart, Easier With Practice focuses on 28-year-old Davy Mitchell searching for a sense of meaning. Davy (Brian Geraghty, The Hurt Locker), a budding writer, sets out on a road trip with his less than compassionate younger brother in hopes of living like Jack Kerouac, only to be disillusioned by the lonely experience.

While in a motel room one night, Davy gets a bizarre phone call from an alluring woman named Nicole. This starts the beginning of a unique, if not lopsided phone relationship between the two strangers that develops into something fantastical for Davy. He eventually wants to meet Nicole in person and turn the fantasy into a reality, but in doing so, he may learn some interesting truths about Nicole and also himself.

The film starts off a little slow, but builds and gains momentum as the story continues. Geraghty, in his first lead solo role, is lovable as this character. He portrays the perfect amount of loneliness, naïveté and his longing for something real. Davy has awkward interactions with friends but becomes much more himself on the phone with Nicole. You see a vulnerability and frustration there that he can’t quite seem to express with others in his life.

Easier With Practice takes you on both a literal and metaphoric ride with Davy and his desperate quest for a connection. This film focuses on two lonely souls looking for something outside of themselves and in each other.