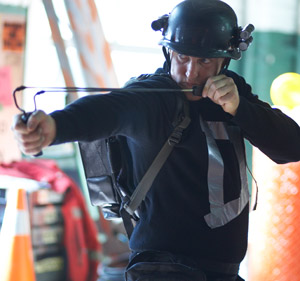 The friends of Arthur Poppington wonder why he sports a dual identity. An everyday man who directs traffic in construction zones by day, he combs the gritty streets of his hometown at night donning an all-black outfit, a Great War trench club and a makeshift symbol on his chest made of duct tape.

OK, so Woody Harrelson is no Christian Bale in playing a dark vigilante trying to rid the streets of crime under the cover of night. Thankfully, Harrelson is not in the same area code as Damon Wayans’ renditions of Blankman or Handy Man, either.

As moviegoers try to wrap their collective heads around Harrelson playing the role of vigilante superhero, they might just be missing out on one of the greatest performances by one of Hollywood’s most misunderstood actors of all time.

In playing the financially struggling construction worker Arthur, while also donning the Defendor alter ego to seek social justice, Harrelson discovers a unique character that will (unfortunately) easily slip under the radar this year.

Quite the intriguing storyline, Defendor tells the tale of a man seeking retribution against Captain Industry – the man Arthur naively believes is responsible for his mother’s death and other social ills. To find his man, Arthur puts on black face paint, all-black clothing and four strips of duct tape on his chest in the shape of the letter “D.” His only weapons are a camera, flashlights, marbles, killer wasps, a Great War trench club and a young prostitute.

In his quest for justice, Arthur’s Defendor persona lands him in the throws of the penal system, only to be analyzed by a court-ordered shrink. It is through the interplay between Arthur and his psychiatrist that we learn of the true meaning of Defendor.

Soon, Arthur realizes he does not have to be Defendor in order to truly make a positive impact in society.

Harrelson delivers a gripping performance as Arthur/Defendor, bringing a level of emotion and character development that is so essential in superhero-themed films, yet so difficult to capture.

As Defendor plays out, Harrelson captivates moviegoers by portraying the film’s protagonist as a lovable man fighting for the noblest of causes by the most honest and honorable means possible. Equally impressive are Kat Dennings, Sandra Oh and Michael Kelly, all three of whom, despite their skepticism of Defendor, portray Arthur’s loving friends.

The story is tight, flows smoothly back-and-forth between present-day story and substantive flashback sequences. Perhaps the only weakness is shaky dialogue at times and a less-than-memorable villain.

Yet, Defendor is more about Harrelson’s performance and Arthur Poppington than the character’s struggle with his archenemy. It is a must see.