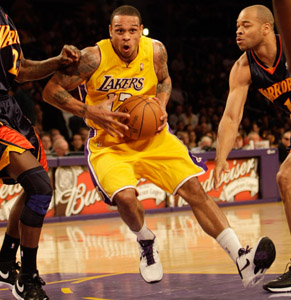 A little over a year ago, Shannon Brown joined the Lakers. Since then, the 24-year-old guard – who is averaging eight points, two rebounds and one assist per game – has become quite a valuable asset to the squad.

Although he failed to make it to the final round of the 2010 Slam Dunk Competition during All-Star Weekend, Brown has one of the highest vertical leaps in the league (44.5 inches) and dazzles crowds anytime he has the chance to dunk. With Kobe Bryant sidelined due to an ankle sprain, Brown has stepped up to the starting lineup and has proved he belongs in the spotlight.

This couldn’t be more evident than when the 42-14 Lakers hosted the 16-39 Golden State Warriors Feb. 16. About halfway into the first quarter, Brown stole the ball from Anthony Morrow, drove down the court, slammed it home and the Lakers never looked back on their way to the 104-94 victory. Brown had a banner night with a career-high 27 points (to lead all scorers) and a career-high 10 rebounds.

The team was Kobe-less again Feb. 18 against the 35-19 Celtics at Staples Center. The backcourt struggled – Brown was able to only put up eight points and four assists – but Pau Gasol and Lamar Odom put up strong efforts with 22 points and 13 points/14 rebounds, respectively. However, Boston ended up with the 87-86 win.

Tonight, the No. 1 in the west Lakers head to Dallas to play the No. 4 in the west Mavericks (35-21) for the final time this season, but the two squads will most likely meet up at some point during the playoffs. Then, the Lakers return to Staples to host Philadelphia (21-34) Friday, Denver (37-19) Sunday and Indiana (19-36) Tuesday.