The Syrenz: Desire to Inspire 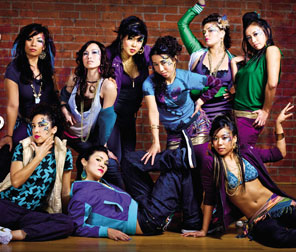 Based in Los Angeles, the Syrenz are an all female group of performers who bring beauty and spirit to their street dances. Pei Pei Yuan (or “B-Girl Peppa” as she’s artistically known) started the group in 2000.

“We are all underground dancers,” says ringleader Peppa. “We earned street respect within our own dances over the years of throwing down in this male-dominated sport in underground jams and battles and practices. It’s not an easy scene to come in to.”

The group has taken over, not just the streets, but the global community. Peppa and other members have won numerous awards for their choreography, but it’s the group’s name that leaves the common spectator befuddled.

“It was inspired by the sirens in Homer’s Odyssey, intriguing and alluring yet dangerous females who lured sailors to shipwreck,” explains Peppa. “These Manhattan Island Syrenz would intrigue and lure boys into a cypher to ‘burn them’ by their dancing.”

Living up to its name, the Syrenz has grown to nine members who have auditioned for prestigious dance shows like “America’s Best Dance Crew.” However, the girls have created a fan base that goes beyond just dance enthusiasts.

“We all give back to the community and teach kids to hopefully inspire them to put their energies in to dance rather than negative activities such as violence, gang life or drugs,” says Peppa. “There is no better feeling than being able to communicate through our movements. Dance is a universal language. It’s a constant challenge where the potential for growth is infinite.”

Peppa currently teaches break dancing classes in Culver City. E-mail BgirlPeppa@gmail.com to find out where and when.

For more information, visit myspace.com/thesyrenz and breakgirl.com.
Article posted on 2/22/2010
This article has been viewed 4580 times.