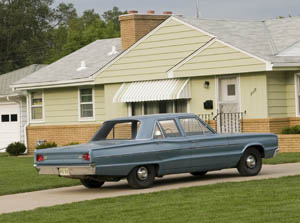 Oh, the wonders of eBay. These days, anything can be found and purchased on that Web site. With just the click of a mouse, people worldwide have access to anything and everything. Old, new, classic, rare, ordinary, extraordinary – eBay is the medium to connect collectors of all sorts.

Since 2005, the online one-stop shop has been auctioning off antique Hollywood collection pieces (signed memorabilia, exclusive tickets to film premieres and clothing worn in popular feature films) and has raised nearly $900,000 for charity. This year, in cooperation with Variety – the Children’s Charity of Southern California, eBay will be hosting the online auction of the 1966 Dodge Coronet featured in the Focus Features and Working Title Films’ A Serious Man. The film is up for two Academy Awards, including Best Picture and Original Screenplay (Joel and Ethan Coen), which will be announced at the ceremony on March 7.

The auction has already started, and you have until Thursday, March 4, just days before the Oscars, to submit your bid. All proceeds will go to Variety, which was founded in 1941 as a nonprofit organization geared toward building a better future for the children in need in Southern California.

The car in question is a vintage vehicle owned and driven by the film’s lead character Larry Gopnik (Michael Stuhlbarg) and is a midsized car that Chrysler introduced in the ’50s and then again in the mid-’60s. The estimated value of the vehicle is more than $20,000, though the opening bid will inevitably be lower. The most famous mall in America – Minnesota’s Mall of America – will feature the Dodge Coronet for the entire run of the auction.

This isn’t just a dress you won’t be able to fit into, or a signed hockey stick you’ll stash in your closet to collect dust. This is your opportunity to own a little piece of movie treasure.

For more information, visit eBay.com/varietyskids.
Article posted on 2/24/2010
This article has been viewed 1851 times.