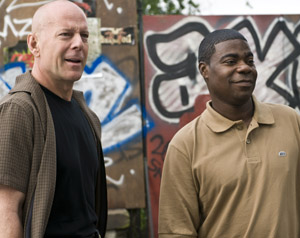 Hollywood loves cop duos, especially if the featured partners mix together like water and oil. In fact, buddy-cop films – particularly those with a comedic twist – are so common in Hollywood that the genre is becoming as mundane as oil or water.

Cop Out, the somewhat highly anticipated buddy-cop film starring Bruce Willis and Tracy Morgan, tries to place itself in the same class as Bad Boys, Rush Hour, Beverly Hills Cop and Men in Black. Unfortunately, Cop Out turns out to be a case of been there, done that – a lighthearted film with funny moments that is ultimately bland.

The film has some promise. Morgan shows potential as a funny co-star, further distancing himself from being labeled as a former “Saturday Night Live” has-been playing mysteriously odd background characters. Even more entertaining is Sean William Scott, whose extended cameo will probably be the most memorable feature of the film, especially his hilarious interactions with Morgan. To the contrary, Kevin Pollak’s extended cameo appears wasted.

Still, despite promising performances by Morgan and Scott, Cop Out ends up falling short as a full-on, laugh-out-loud comedy. Willis does not maintain a strong presence throughout the film, and the villainous Guillermo Diaz seems more like a childish practical joker incessantly smiling than a treacherous, conniving mastermind.

Just like the plotlines of Rush Hour and Bad Boys, the plot of Cop Out is rather simple, attempting to take a back seat to the comedic interplay between Willis and Morgan. There are several scenes, including the opening interrogation between Morgan and Juan Carlos Hernández, which conjure up genuine laughs, and Willis and Morgan have enough chemistry between each other to make them believable as partners. Yet, Cop Out doesn’t make a strong case to place itself among the most memorable within the buddy cop genre.