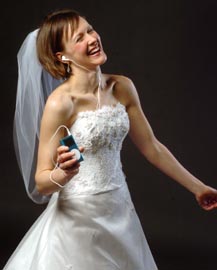 When Kate Wolfe-Jenson turns in at night, she often can’t keep her mind from racing. “I’m thinking my late-night thoughts,” she says.

She tried using audiobooks to help her calm down and doze off. But this system worked imperfectly because she used audiotapes, which she had to flip over at regular intervals that kept her awake.

Then, she switched to an iPod digital-music player and found bedtime bliss. Wolfe-Jenson, one of millions who use Apple Computer’s iconic handheld devices, places her iPod at her bedside and tucks the player’s signature white earbuds under her pillow. With the volume cranked up, she can hear one of Terry Pratchett’s Discworld fantasy novels well enough to become immersed in the story and, before long, drop off.

Silicon Valley, Calif., resident Wolfe-Jenson and her husband, Ralph Jenson, are citizens of the so-called iPod Nation. That’s the name often applied to the mushrooming number of Americans who have embraced the devices and come to depend on them in sometimes-unusual, not-always-music-related ways.

Apple has sold more than 10 million iPods since introducing an initial version of the device in October 2001. Of those, more than 8 million were sold in 2004, and nearly 5 million were sold during the last quarter of the year alone. The devices, which have gone through four generations, now dominate the digital-player market.

They range from the low-cost ($150), Juicy Fruit-sized iPod shuffle gizmos to high-end iPod Photos ($450) with capacious hard drives and color screens for showing digital photos. A black-and-red iPod is aimed at fans of the Irish rock band U2. Curvy, compact iPod minis in bright hues are intended for the style-savvy.

And now, it seems, those easy-to-spot earbuds are everywhere.

Wolfe-Jenson and Jenson have more than done their part to iPod-ize the nation. The couple and their daughter, Alexis, are a four-iPod household, which isn’t all that unusual anymore.

In addition to the iPod at Wolfe-Jenson’s bedside, there are the first-generation model Jenson uses to keep computer files and the newer iPod he takes on bicycle commutes – he buds up one ear but keeps the other free for safety – and the iPod mini the family uses on road trips, with tunes and audiobooks piped wirelessly through the car’s radio.

“Absolutely not a day goes by when we’re not using at least one of the players each, or maybe two,” Jenson says.

The iPods’ popularity has spawned a booming secondary market in iPod accessories – more than 400 of them, by one recent estimate – in what some have nicknamed the iPod Economy. Such add-on gear ranges from mounting devices and protective cases in all colors and textures to devices that help the minimalist iPods take on new chores.

With sound-recording attachments, iPod users can use their players as the digital equivalents of tape recorders in classrooms or in their work. Kevin Hendricks, a St. Paul, Minn.-based freelance writer, hated his old tape-based recorder with cassettes that needed to be flipped over at intervals during interviews. “It was just kind of pain listening to it because you had to fast-forward across the whole tape” to find specific portions of conversations, he said.

His iPod with a Griffin iTalk add-on works like a digital voice recorder – except, with a 40-gigabyte hard drive, he is able to store hours upon hours of interviews. “I can go on a trip somewhere and do 10 interviews in a day,” he said.

His only problem: Before interviews, he must spend a few minutes satisfying his subjects’ inevitable iPod curiosity.

Terry Snell, a professor in the Georgia Institute of Technology’s biology department, has taken iPod-based sound recording to a delicious extreme. His 20-gigabyte iPod is hooked to a high-quality mic with a parabolic reflector to concentrate and collect sounds – bird calls, to be exact.

The sounds are then saved to a laptop so Snell and his students can analyze them using ornithological software, such as Canary or Raven, “which allow us to estimate frequency, call rate, etc.”

What’s more, they can use the iPod to play back the calls and record the birds’ responses. “The iPod allows us to get into the field with a whole library of professionally recorded songs,” he said.

In iPods’ longstanding role as high-capacity portable hard drives, they have often proved to be lifesavers because of their ability to safely stockpile vast amounts of digital data.

Maplewood, Minn., attorney Thomas Tuft decided to back up all his firm’s computer files onto his iPod one day. He was wandering by the office’s computer-network server when he spotted a high-speed FireWire port in front. On a whim, he used his iPod’s computer-syncing cable to plug in and move the files – about 2 gigabytes of data – to the player.

Good thing: A day or so later, the office’s network server crashed and took every document with it. He did have another backup, but it wasn’t as up-to-date as the one on the iPod. So when he moved the duplicate files on the player to a spare computer, he got the firm up and running in no time.

Linda Cullen’s new iPod already may be among the most-traveled. The St. Paul, Minn.-based photojournalist, who has worked in such locales as Afghanistan, Iraq, Istanbul, Sri Lanka and Thailand, bought an iPod Photo as a Christmas present to herself.

Now, she uses it to back up the photos on her Apple iBook laptop. She also loads up her Arabic and Farsi language lessons along with music, audiobooks and recorded National Public Radio programs for those long hours on planes (she is unable to read in the air because of chronic motion sickness).

As a photographer, showing off photos on the iPod Photo’s color screen comes in handy on planes when she tells fellow travelers about her work and in photo-shooting situations when she needs to break the ice with potential subjects. Cullen was disappointed with her iPod’s less-than-stellar internal-battery life, a common user complaint. She licked the problem with an add-on Belkin battery pack that uses four standard AAs.

Minneapolis, Minn., graphic designer Tod Foley uses his iPod as a personal organizer containing his calendar and contact information, a simple if sometimes-overlooked trick for those synchronizing their players with Macintosh computers. (Windows users must install extra software to pull this off.)

“That’s a nice feature to have at the post office,” Foley said. “If I need my brother’s address, I can scroll through the address book, and there it is.” For many iPod users, of course, the devices are mainly if not solely about tunes. They’ll load up their players with hundreds or thousands of songs ripped from CDs or purchased on Apple’s iTunes online music store. Then, they’ll fire up the iPods for their workouts or their morning commutes and often sing to the music at the top of their lungs.

Katie Condon and John Jodzio are wild about music, too, but they needed a good excuse to pop for something as pricey as an iPod. So, the Minneapolis couple decided they’d use a yet-to-be-purchased player as the digital disc jockey at their upcoming wedding dance – cheaper than hiring a live band or a human DJ, they figured, and boasting many more musical choices. They’ll likely tap one of their groomsmen as an iPod minder during the August celebration.

Now, they face the daunting task of loading up the iPod with all their music and creating suitable play lists. They’re jotting down song ideas in a notebook and asking the advice of friends “whose musical tastes we trust,” Condon said. They’re also planning live-music segments courtesy of musician friends and relatives so the dance won’t become too tech-impersonal.