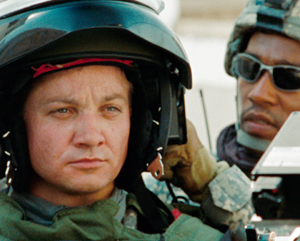 Jeremy Renner and Anthony Mackie in The Hurt Locker : Our pick for Best Picture

Avatar; The Blind Side; District 9; An Education; The Hurt Locker; Inglourious Basterds; Precious; A Serious Man; Up; Up in the Air

Though there are 10 movies up for the top honor for the first time in decades, you can basically rule out the five that don’t have coinciding Best Director nominations. All awards season long, The Hurt Locker and Avatar have been splitting the pots.

Most people agree that box office behemoth Avatar is a monumental piece of filmmaking, but it can be seen as more of a technical achievement and will be rewarded as such in the technical categories. Plus, rarely in the Academy’s history has a film gone on to win Best Picture with no writing nomination, and the last film, ironically enough, was Titanic.

Since most people in the Academy don’t make movies that make billions of dollars, they will probably vote for the “Little Movie That Could, and Did” – The Hurt Locker. I say “Little” only because, not only was it shot on a shoestring budget, but it would also be the lowest grossing Best Picture winner ever. Luckily, and not so coincidentally, it’s now out on DVD for voters to see.

Finally there’s some diversity in this category. Bigelow is only the fourth female to be nominated, while Daniels is only the second, yes second, African American.

The story that the media loves, though, is the “Battle of the Exes,” with ex-spouses (but still friends) Bigelow and Cameron competing against each other. They have each snagged big awards so far with Cameron winning the Golden Globe; but with Bigelow’s win at the Directors Guild Awards to become the first female to win the honor, it looks like she’s about ready to make more history. Personally, I’m hoping Bigelow wins since she directed, in my opinion, the best movie of all time: Strange Days.

Hopefully, the other three nominees are happy to be there because this looks like a two-horse race between first-time nominee Sandra Bullock and 16-time nominee Meryl Streep (breaking her own record, again). Both are respected by their peers, and both are still top box office draws after the dreaded “f” word, forty.

Bullock’s win at the Screen Actors Guild Awards certainly bodes well for her chances, but can you believe that Streep has only won twice, with the last win coming in 1983 for Sophie’s Choice? I wonder if the Academy will want to reward a living legend since she’s gone home from the Oscars empty-handed more times than anyone else.

Granted, they could split the vote, but I’m going to pick Streep by the thinnest of hairs. Interesting side note: if Bullock wins the Oscar as well as the Razzie (for Worst Actress for All About Steve), she’d be the first person ever to win both awards the same year.

Bridges has had a long, illustrious career, but has never won many awards – until this year, sweeping the big ones so far. Many feel that he’s overdue, so this year the Academy will reward him not just for his acting skills in this particular movie, but also for a lifetime achievement award of continual good work.

Usually this category is the most likely category to have a surprise winner. Not this year. Mo’Nique has been virtually unstoppable on this year’s awards show circuit, picking up every major prize. She also gets bonus points for a glamorous comedienne taking on a totally unglamorous, unsympathetic dramatic role.

Just like his counterpart in the Supporting Actress category, Waltz has been hogging almost every award. Surprisingly, though, I think this category is closer than most Oscar watchers believe, and there could be an upset. Both Plummer and Tucci are well-respected industry veterans who are both first-time nominees; Academy members might want to reward one of them, especially Plummer, with a virtual lifetime achievement award (see Bridges, Jeff). Having said that, I’m sticking with the frontrunner on this one, but reserve the right to hedge my bet.

My gut says the Academy will give the award to Tarantino as a pretty nifty consolation prize for losing out on Best Director, à la Pulp Fiction. Plus, he’s a director that actors would love to work with, and they comprise the largest voting bloc. Boal won the Writers Guild Award, so this looks like a battle between the two. People always say stick with your gut, so I’m sticking with Tarantino.

As in Tarantino’s case, I believe Reitman and Turner will take the gold man as a way to give a top contender a major prize and allow Reitman to not have to go 0-for-2 on Oscar night. His win at the WGA Awards solidifies his frontrunner status.

Coraline; Fantastic Mr. Fox; The Princess and the Frog; The Secret of Kells; Up

Pixar will be able to add another notch to its golden belt. I have to go with the nominee that is also up for Best Picture, Up.