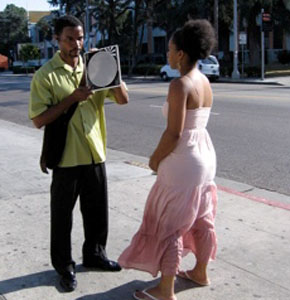 James Cameron was born in Ontario, Canada in 1954 and moved to the United States in 1971. The son of an engineer, he majored in physics at California State University, Fullerton, but, after graduating, drove a truck to support his screenwriting ambition.

Jason Reitman was born in 1977 to Animal House producer Ivan Reitman. He graduated from the University of Southern California where he was an English major.

Kathryn Bigelow is a California native who was born in 1951. She spent two years at the San Francisco Art Institute, and at 20, she won a scholarship to the Whitney Museum’s Independent Study Program. She later graduated from the film program at Columbia University. Between 1989 and 1991, she was married to fellow Oscar nominee, James Cameron.

Lee Daniels was born the day before Christmas in 1959. He first worked for a nursing agency, but by his mid-20s, he was working with Prince on Purple Rain (1984). Now he is the second African-American director to be nominated for an award and the first to have a film nominated in the Best Picture category.

Quentin Tarantino was born in Knoxville, Tenn., in 1963. He screened his first film, Reservoir Dogs, which he wrote and directed, at the Sundance Film Festival in 1992 and has followed it with one Academy Award, one Golden Globe and one BAFTA award.

Those are this year’s Oscar nominees for Best Achievement in Directing, and how very different they are. Whether they have been in this position before or not, it’s an honor nonetheless. Each has worked his (or her) way up, and they are now each reaping the benefits of their dedication.

Since we’re talking about where our favorite directors have come from, there is a little event happening in our town that celebrates soon-to-be famous directors. The future of the industry rests within the visionary films of the students at Columbia College Hollywood that is holding its annual “A Film Festival for the Entertainment Industry” on March 4.

Dean of the College Alan Gansberg started the festival back in 2002 and has watched it grow significantly in size ever since.

“We originally did it at the Raleigh Studios, which has a 150-seat theater,” says Gansberg. “We outgrew that quickly. One year we did it at the Pacific Design Center, but otherwise, we have done it at the Harmony Gold Theatre, which has a 380-seat theater and can accommodate a reception, and has free on-site parking, which is good for our ‘starving students.’”

Any current student or recent alumni of Columbia College Hollywood can submit a film, though the films must be under 20 minutes in length. According to Gansberg, the program includes “short films – dramas and comedies, one stop-motion animation, one claymation and one music video. There are 10 projects being screened in all. We have an industry jury that picks the films from short films, animated projects, music videos and documentaries submitted by our students.”

However, they do not open the festival to the general public, because the screenings are specifically for the producers, executives, agents, managers, directors and others in the film and TV world to become acquainted with the work of up-and-coming directing talent. About 80 guests who work in the entertainment industry and “many of the large agencies send representatives, and we get interest from studios and production companies,” admits the festival organizer.

The festival receives 80-plus submissions though they are only able to choose 10 percent of those for the program. There are two nights of an internal festival prior to March 4 in which another 20 films are screened for the cast and crew. More than anything, the organizer is most proud of the success his students have found because of the festival.

“A few years ago a film that we screened was picked up by the PBS series, ‘Fine Cut,’” he shares. “And two years ago one that we screened subsequently won a BAFTA/LA Student Award (British Academy of Film and Television Arts Los Angeles). Another from 2007 subsequently won a DGA Student Film Award. And, of course, some of the students whose films screen do get jobs or, at least, ‘meetings’ from the festival.”