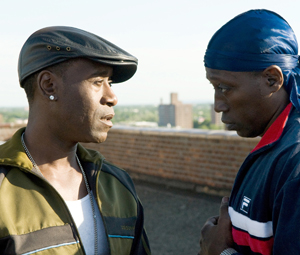 Antoine Fuqua has a fascination with cops and carnage. In Brooklyn’s Finest, his latest action-thriller, the director (who has helmed big budget flicks like Shooter, The Replacement Killers and Training Day) follows three cops serving at various levels of the NYPD hierarchy who end up at the same deadly location after enduring different career paths.

Eddie (Richard Gere) is a disgruntled patrolman who is a week away from retirement after 22 years with the department. Ethan Hawke, as Sal, is an aggressive narcotics officer who has been stealing from drug dealers to support his family of five. Don Cheadle plays veteran cop Tango who has been undercover for so long his loyalties have started to shift and he has lost track of his real life. Over the course of several days – seven to be precise – the separate storylines of these conflicted city cops begin to unfold, coming together near the film’s conclusion in Brooklyn’s notorious Brownsville district.

With a star-studded cast, which includes Will Patton, Vincent D’Onofrio, Ellen Barkin and Wesley Snipes, the most engaging performance comes from Snipes, who portrays a character akin to the infamous drug czar he played in New Jack City. Decked out in braids and bling with the threatening charisma of a great screen villain, Snipes plays the leader of a crime gang that Tango has infiltrated.

With plenty of blood, carnage and destruction, Brooklyn’s Finest captures the volatile world of one of New York’s most dangerous precincts through the eyes of these officers. Despite offering little to distinguish itself from other cop dramas, there are some great performances from a cast that features top notch actors.


Brooklyn’s Finest releases in theaters March 5.
Article posted on 3/1/2010
This article has been viewed 1681 times.