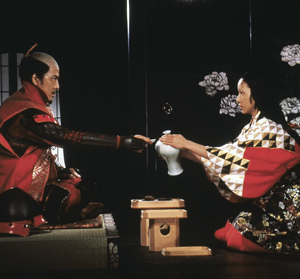 Ran is Japanese filmmaker Akira Kurosawa’s late masterpiece, and since its initial release in 1985, Ran has continued to captivate audiences around the world. A skillful reimagining of Shakespeare’s King Lear, the picture was nominated for several Academy Awards, but only won the Oscar for Emi Wada’s elaborate and colorful costume design. The film was also nominated for several BAFTA awards, winning for Best Foreign Language Film and Best Make Up Artist. It was named Best Foreign Film of the Year by the New York Film Critics Circle and was chosen as the Best Film of the Year by the National Society of Film Critics.

Ran tells the story of an aging Japanese patriarch named Hidetora Ichimonji, and the chaos that ensues when he relinquishes power to his three sons: Taro, Jiro, and Saburo. His youngest son, Saburo, tries to warn the old man of the dangers of dividing his power between the three of them, which Hidetora mistakes as a threat and subsequently has Saburo banished. Saburo’s warnings quickly come to fruition, and Hidetora’s two remaining sons embark on a violent plot to strip their father of his remaining power.

The film becomes an examination of greed, violence and vanity. War is inevitable and is depicted as both breathtaking and horrifying under the unparalleled direction of Kurosawa.

This year marks the 25th anniversary of Kurosawa’s epic, and the film has been restored by none other than Rialto Pictures, whose previous reissues read like a definitive canon of international cinema. Their restoration of Ran is quite remarkable, most noticeably in the details of Wada’s costumes. Instead of just marveling at the color, you can see the craftsmanship in the texture and materials.

This is quite possibly the best that Ran will ever look, and you would be doing yourself a favor by seeing it on the big screen. Rialto obviously put a lot of work into this, and in my opinion this is their finest restitution since their re-release of Max Ophüls’ Lola Montes, which is no small praise, as that film is one of the most beautiful ever made.

The chance to see an epic, like Ran, restored and in the theater should not be passed up. You cannot recreate this experience at home.