Flogging Molly: Irish septet is back with first-ever CD/DVD. 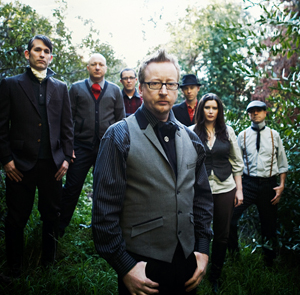 Flogging Molly got their start as Molly Malone's.

Grab your Guinness, grab your Powers, it’s that time of year when we’re all Irish. Who better to ring in the St. Patrick’s Day festivities than hometown heroes, Flogging Molly? Back with their first-ever CD/DVD set, Live at the Greek Theatre, Flogging Molly capture the intensity of their gig last September at one of Los Angeles’ most revered venues.

“It was unbelievable. It was such a weird twist of fate to be able to be up on the stage where I’ve seen so many people play before,” recalls multi-instrumentalist Robert Schmidt. “Since the band started in L.A., it’s just one of those places that means a lot when you get the chance to break out there and do it.”

The 22-song set spans the band’s entire career and captures them at what is arguably their peak. It’s a small consolation for Angelenos who won’t get the opportunity to catch them on their annual Green 17 Tour this year.

So how does a seven-piece band with a mandolin, flute, accordion and banjo break into the mainstream? According to Schmidt, it’s honesty.

“The reason we make music is to connect with people. That kind of honesty isn’t prevalent in the music industry so people are moved by it, or [it] draws them in at least,” Schmidt says. “I think [our music is] just honest. I don’t think we put any agenda over it or make any kind of overriding statement with anything. We make music that people can relate to and brings people together.”

Most bands feel their Twitter/MySpace/Facebook page is enough fan interaction to garner CD sales and concert attendance, but to Flogging Molly, their connection with fans gets more intimate than that.

“We maintain an attitude that there’s not a lot of difference between our fans and us,” Schmidt points out. “At the core we’re no different than any of our fans; we just have a job that brings us in front of them.”

Their humility began at Molly Malone’s, an Irish pub on Fairfax and 6th St., where the band played to a packed house of buzzed patrons nightly. Soon their drinking anthems and hangover laments garnered them enough attention to break out of Los Angeles and across the country. By 2008, their fourth studio album, Float, cruised to the fourth spot on the Billboard 200, and they headlined as one of the main stage acts at KROQ’s Weenie Roast. If a mainstream rock station could embrace the Irish septet, surely the world could as well.

“There are bands that have that attitude that they make it special,” Schmidt explains. “That’s more of a level of entertainer I think than a level of musician and we don’t really have that much interest in being entertainers. We just want to write music and share it with people.”

Proving major labels aren’t necessary for mainstream success in today’s music culture, Flogging Molly has built an audience as diverse as its music. Schmidt loves both European and American audiences alike, but admits there are qualities in shows overseas he’d like to see over here.

“I don’t necessarily know if it’s the audience or the way they put together shows, but it’s a lot less segmented over [in Europe], like people are into all different kinds of stuff,” Schmidt explains. “In America, it’s more regimented, like you wouldn’t mix a pop band with a rap band on a festival stage very often. I appreciate that kind of diversity. It’s pretty refreshing.”

After their Green 17 Tour concludes on St. Patrick’s Day in Arizona, the band will hop across the pond and play some European festivals in the summer. They’ll come back stateside for a few more shows before hunkering down and writing/recording the next album by the end of fall. It’ll be a busy year for Flogging Molly, but it’s all for the fans.

“We wouldn’t be doing this if it wasn’t for [our fans]. We’d look pretty ridiculous up on stage playing to an empty room,” Schmidt admits. “We just try to maintain an appreciation for the fact that people spend money and take time to come out and see us when we come in town. We make our living on their loyalty and generosity.”

Live at the Greek Theatre is currently available. For more information, visit floggingmolly.com.